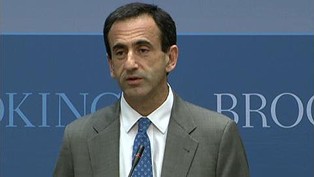 He's moving on. More on that below.

He serves US imperial interests. They include international security, NATO, coordinating with EU nations and regional organizations, counterterrorism, and nonproliferation.

"From the beginning of the Obama administration," he said, "we've made a deliberate and conscious effort to strengthen our ties with Europe and to work with our most important allies around the world on global issues."

Imperial ones are prioritized. He stopped short saying so. His new position includes them. He's Washington man in an important part of the world. He's Israel's man at State.

On March 2, the White House announced his appointment. He'll join Obama's National Security Staff. He'll do so on March 11.

"Phil has been a key member of President Obama's foreign policy team for the past four years, and his work with our European Allies and partners has been indispensable in helping us to formulate policy and address issues around the globe, including Libya, Syria and Iran."

So did Dennis Ross under Clinton, Bush and Obama. Committed Zionists alone are appointed. The more hardline, militant, and anti-Iranian, the more eligible. Gordon's resume qualifies him.

From 1999 - 2009, he was Brookings Institution senior fellow. It's a longtime imperial tool. It's reliably pro-Israeli. It's militantly anti-Iranian. It reports what Washington wants to hear.

It's trustees, senior fellows and experts include a rogue's gallery of extremists. They turn truth on its head. They're well paid to do so. Gordon did for a decade. He contributes to major scoundrel media publications. They welcome his views. They reflect power politics.

He also taught and lectured at INSEAD (European Institute of Business Administration) and the German Council for Foreign Policy (DGAP).

INSEAD calls itself "The Business School for the World." It's allied with Harvard, Wharton, Stanford, and Northwestern's Kellogg School of Management.

During his 2008 campaign, Gordon was Obama's senior foreign policy advisor.

Are Americans better off then than earlier, he asked? Not at all, he said. "(T)he world is more dangerous. America's enemies are stronger and more numerous, and our international standing is vastly diminished."

He disingenuously called democracy the centerpiece of Washington's foreign policy. It stalled or reversed in the Middle East, Russia and Latin America, he claimed.

He turned truth on its head saying so. He called "these unwelcome developments" not entirely Bush's fault.

Who then if not him? Events preceding his presidency contributed. Post-9/11, they accelerated.

Gordon's job at State does the same thing. His tenure and positions showed he did what Washington expects. He moves on to do more.

He wants America's standing in the world improved. In 2008, he said he wanted allies "inspired (to) work willingly with us, conduct tough but serious diplomacy with adversaries, (and) seek to build national unity and international legitimacy…."

He said Obama needs "to defend traditional American interests forcefully while grappling with new issues and repairing the breach with an alienated world."

He didn't say how. It's unknown then if he knew what he knows now. Obama exceeded the worst of Bush. He's waging multiple direct and proxy wars. He's got others in mind.

Across North Africa, the Middle East, and parts of Eurasia, America's more hated than ever. It's for good reason. Obama's waging war on humanity. Don't expect Gordon to explain.

He said expect Obama to "bring a new and distinctive approach to today's changed world." He's "not bound by Manichean, highly militarized thinking."

He knows "military force has a role to play in the world."

"He has called for a larger US military, advocated the deployment of at least two additional brigades to Afghanistan, and on many occasions said he would not hesitate to use force to protect US national interests."

He knows other challenges have to be addressed.

His "international background also allows him to see the world in a usefully different way."

It's not clear what experience he means. He taught constitutional law, was Illinois' 13th District senator, and served less than four years as US senator before being elected president.

What little he knew little about foreign policy came through his chairmanship of the Senate Foreign Relations Subcommittee on European Affairs.

He assembled a war cabinet as president. It remains in place. New names and faces replaced old ones. Policies remain unchanged.

He prioritizes national security. It means maintaining the "strongest military on the planet," he said.

He outspends all other countries combined. He has to given his priorities. War on the world defines them. He's got lots of new targets in mind.

Obama reinvented a Cold War with Russia. He challenges China's economic and military might.

He supports "the principle of willingness to engage directly with adversaries," said Gordon. He's more than ever inclined to do so now.

He prioritizes doing it militarily. He's committed to might over right.

"Obama and his team offer not just an opportunity for change, but for strategic intellectual coherence."

It's hard imagining what he meant. Things didn't soften. They toughened. America's more than ever belligerent. War on humanity is policy. Gordon's job is supporting it. Expect him to take full advantage.