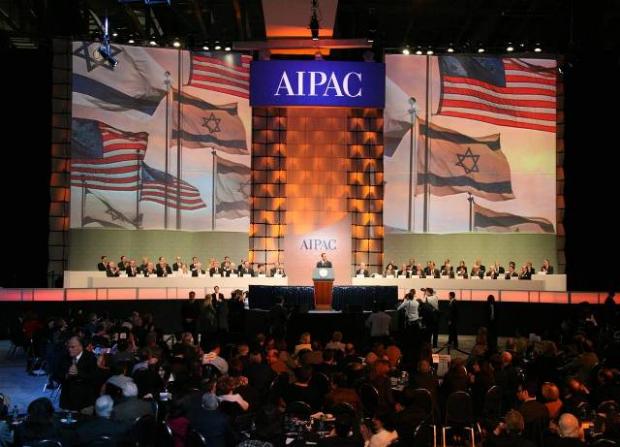 It supports war, occupation, exploitation and dominance. It deplores peace, equity and justice.

It's contemptuous of fundamental human rights. It believes Jews are God's chosen people. It thinks Arabs are subhumans. It favors eliminating them altogether. War is its instrument of choice.

Washington again was venue. A rogue's gallery of participants attended. Warmongering speeches were featured. AIPAC does it annually.

It disseminates disinformation, lies and hate. It viciously attacks opponents. It maliciously calls Iran "the world's leading state sponsor of terrorism and is racing toward a nuclear weapons capability."

It lied saying so. No nation tops US and Israeli state terrorism. They menace humanity.

It wants unchallenged Israeli regional dominance. It favors no-holds-barred belligerence to achieve it.

Expose AIPAC for what it is. It menaces freedom and peace. It embraces war. Its conferences glorify it.

AIPAC wants war. Doing so is lawless, madness and self-destructive.

"America must make clear that it will act to prevent Iran from achieving the capability to build a nuclear weapon at a time of its choosing," it says.

"Contain(ing) a nuclear Iran" is inadequate. US policy must reject any possibility of Tehran developing nuclear weapons. All options must be considered, including "military action."

Economic sanctions must be "accelerated" and "crippling." Washington should do whatever it takes to prevent a nuclear Iran.

AIPAC's a destructive, malevolent, evil force. It's heading Washington for war. Hawkish speakers had their say.

"Today, that relationship is more important than ever before," he said. "Are we doing everything we can to ensure that America will stand by the side of Israel now and always?"

He's concerned about America's "growing allure of isolationism." It threatens US/Israeli relations. It's "extremely dangerous" for Israel's security and well-being.

America's leadership is changing, he warned. Over 40% of US legislators in recent years are new. Many never visited Israel. Many others never travelled abroad.

Many on congressional committees have no foreign policy experience. He stressed reaching beyond AIPAC's traditional Jewish base of support.

Silence greeted his warnings. Standing ovations followed his affirmation of US support.

Michael Oren is Israel's US ambassador. He deplores peace. He prioritizes war. He disgraces himself in the process. He opened AIPAC's conference. He addressed its plenary session.

"We seem to be negotiating with ourselves," he added. "What is the price of inaction," he asked?

He wants Israel declared a "major strategic ally." AIPAC prioritizes it. Getting it will be unique. No other nation has it. It may exempt Israel from sequestration cuts. It advance the ball for war.

Washington "has no better friend in the world than Israel." Roots are longstanding. Most Americans support it.

"Israel has always sided with the United States on major global issues."

Former Secretary of State Alexander Haig called Israel "the largest American aircraft carrier in the world that cannot be sunk, does not carry even one American soldier, and is located in a critical region for American national security."

"In return for its aid to Israel, the United States receives not only an armed but an innovative ally, enhancing America's military edge."

"ISRAEL IS AMONG THE FEW COUNTRIES in the world - and the only Middle Eastern state - to consistently stand alongside the United States on strategic issues. "

"A nuclear-armed Iran will imperil every pro-Western Middle Eastern state and ignite a nuclear arms race in an inherently unstable region."

"Israel remains the region's only credible foil to Iran."

"Israel is the only Middle Eastern state never to oppose America on major international issues."

Its benefits are "incalculable." They "outweigh any price." It's a "partner par excellence." It's "America's ultimate ally."

Netanyahu's home in Israel. He repeated a familiar theme. He said Iran uses nuclear talks to buy time. It "continue(s) enriching nuclear material for an atomic bomb and is indeed getting closer to this goal."

"(I)n the coming days, I will continue my efforts to unify and galvanize forces ahead of the major national and international challenges that we face."

Ross called its strategy "rope-a-dope." It's buying time. He urged P5+1 countries to "go for an endgame strategy."

He wants Iran made an offer it can't refuse. He wants an alternative stressed if it does. He wants Washington and other P5+1 countries to be more aggressive. He has war in mind.

When Netanyahu and Obama meet, they'll define "prevention." They want "better understanding of when (it) fails and force becomes inevitable."

Abrams favors it. He accused Iran of advancing its nuclear weapons program. No evidence whatever suggests it. Abrams knows it. He lied.

He added more. He said Tehran helps Assad in Syria and Hezbollah in Lebanon. He ignored Washington's support for anti-Syrian government terrorists. He said nothing about its regional menace. He focused on belligerence and bald-faced lies.

He wants one able to unite regional countries around the "joint challenges of radical Islamic terror, border security, missile defense and Iran."

He suggested anti-Iranian sanctions and diplomacy failed. He doesn't believe they'll produce "a moment of truth in which the ayatollahs will give up their nuclear program."

He wants all options considered. "(A)nd we expect all who say it to mean it," he stressed. We in Israel, he added, "mean it. Let me repeat - we mean it."

He left little ambiguity where he stands. Netanyahu is likeminded. So is AIPAC. It's openly stated priority is obtaining "major strategic ally" status. Its equally clear one is war on Iran.