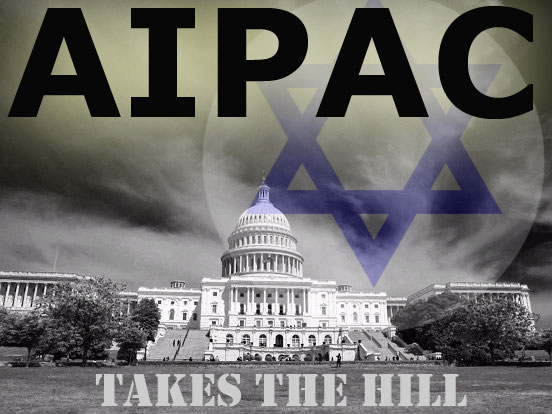 It's a dagger in the heart of rule of law principles and democratic value. It menaces world peace. Its annual conferences display the worst of its agenda.

A rogue's gallery of speakers participate. Day two featured Joe Biden and Netanyahu. They spoke back-to-back. Biden did in person. Netanyahu followed by satellite. He remained home in Israel.

Iran was the topic of choice. Obama's "not bluffing," said Biden. He "cannot and does not bluff."

He lied saying "We're not looking for war. We're ready to negotiate peacefully. But all options including military force are on the table."

He lied again adding "While that window is closing, we believe there is still time and space" for diplomacy. None existed for 34 years. None exists now.

America remains hostile. It's intolerant of independent states. It wants subservient pro-Western ones replacing them. War is an option of choice.

Biden called Iran an "existential threat." He lied saying so.

"We have a shared strategic commitment," he said. "Let me make clear what that commitment is: It is to prevent Iran from acquiring a nuclear weapon, period."

It's "important that the world is with us if we have to act."

"We are very pleased by the vice president's strong statement that the president is not bluffing in his commitment to prevent Iran from obtaining a nuclear weapon. It was a strong and eloquent speech."

His bluster wore thin long ago. Why Israelis put up with him they'll have to explain. Israel faces no existential threat. Netanyahu can't be trusted. He menaces world peace.

He lies about Iran. He's a serial liar. He said Iranian sanctions haven't worked. He omitted explaining they're lawless. They target ordinary Iranians. They're in place to inflict pain and suffering.

He said Tehran must be confronted with a credible military threat.

"Iran still hasn't crossed the red line, but it's getting closer," he added. Tehran's stalling, he claimed. It's using P5+1 talks to "run out the clock."

"Iran has made it clear that it will continue to defy the will of the international community."

"Time after time, the world powers have tabled diplomatic proposals to resolve the Iranian nuclear issue peacefully. But diplomacy has not worked. Iran ignores these offers."

Negotiations are red herring cover for regime change. Tehran's nuclear program is legal. It complies fully with NPT provisions. It replicates what dozens of other countries do. It's unfairly targeted, criticized and vilified.

Israel is nuclear armed and dangerous. Netanyahu's a regional menace.

"We must stop (Iran's) nuclear enrichment program before (it's) too late," he claimed.

Israel seeks peace, he said. He lied saying so. Earlier he called pursuing it with Palestine a waste of time. His anti-Iranian rants show he prioritizes war. He deplores diplomatic conflict resolution.

His entire talk was hostile, belligerent, and over-the-top. He raged like an out-of-control despot. AIPAC participants approved. He got numerous standing ovations.

"We need to recognize that military action against Iran may become necessary to protect America, Israel and our allies."

"If there is one lesson we have learned about the Middle East in recent years, it is that nuance is not only not effective but can be dangerous."

"We must speak with unambiguous clarity. The United States will not accept a nuclear weapons-capable Iran."

AIPAC prioritizes Israel becoming America's "major strategic ally." Getting it will be special. No other nation has it.

AIPAC's lobbying furiously to protect it. Exempting Israel from sequestration is prioritized.

Odds favor it happening. AIPAC's too potent to ignore. Annual Israeli aid is automatic. It's largely military. It increases regularly.

Frequent add-ons supplement it. What Israel wants it gets. Congress willingly goes along. Expect nothing different this time.

On Sunday, they began operating in the West Bank. They segregate Israelis from Arabs. Doing so exceeds the worst of Jim Crow South.

Israeli authorities claimed otherwise. They lied doing so. They said they're to transport Palestinian workers to central Israel. It's meant to ease congestion.

Palestinians wishing to travel on "mixed" lines will be denied. Spurious reasons include claiming they pose a security risk.

At the same time, Israel's Transportation Ministry said it's prohibited "from preventing any passenger from boarding any line of public transportation, nor do we know of a directive to that effect."

"Installing these lines was done with the knowledge and complete agreement of the Palestinians."

Israel's mandate reflects "another manifestation of a regime based on discrimination and segregation."

Although ostensibly Palestinians can still travel on mixed buses, Israeli police are "preparing to enforce separation."

Palestinians traveling on regular buses will be ordered off. Those refusing will be harshly confronted.

"Palestinians traveling from Tel Aviv to Samaria were apparently already being taken off buses last Thursday."

Witnesses said "an entire busload of people were ordered off a bus near the Shaar Shomron interchange, and their identity cards were checked."

They were all Palestinians. They "were ordered to leave the terminal and walk to the Azoun-Othma checkpoint, 2.5 kilometers away."

"According to the police, they were merely implementing Transportation Ministry instructions."

"The way (Israel) manage(s) the territories is a far cry from the way occupied lands are meant to be managed."

"Rather than express 'concern' for the Palestinians by excluding them from Jewish bus lines, it would behoove the prime minister to immediately put a stop to this racist segregation."

Expect him to do nothing of the sort. He's a racist. He's a serial lawbreaker. He enforces occupation harshness. His contempt for non-Jews is palpable.

He denies Palestinians fundamental civil and human rights. He wages war without declaring it. He orders targeted assassinations. He runs torture prisons.

He threatens regional war. He menaces world peace. He governs like a tinpot despot. Expect worse ahead on his watch.