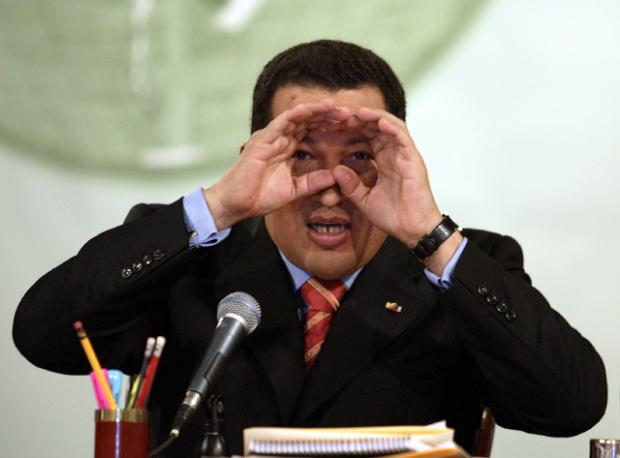 He was one of Latin America's most notable leaders. His charisma was special. It was real. His spirit lives.

An era ended with his passing. He was the world's leading anti-imperialist hero. He spoke truth to power. He did so courageously. He risked his life doing it.

Obama may have ordered him killed. Very likely he did. Believe it. Chavez did. He had good reason to do so. He said it openly. Castro warned him. He explained how imperial Washington works.

Washington does it for wealth, power and dominance. It spurns rule of law principles, democratic values and popular needs.

Chavez was polar opposite. He championed democracy. He established the real thing. He defended civil and human rights.

He operated no secret prisons. He didn't invade his neighbors. He engaged them cooperatively. He valued unity and world solidarity. He abhorred torture. He advocated peace, not war.

He abolished neoliberal harshness. He championed populism. Venezuelans loved him for doing so. They elected him overwhelmingly four times.

They rallied supportively for him publicly. They did so often. At times, millions turned out.

He established free, open and fair elections. Jimmy Carter calls them the world's best. He said so for good reason. They shame America's sham process.

He valued Venezuela's independence. He fought hard to keep it. He refused to surrender to Washington.

His used Venezuela's oil wealth responsibly. He lifted millions from poverty. He created economic growth and jobs. He provided essential social services. Major ones are institutionalized.

He's loved and admired worldwide. He's hated for his virtues. He made promises and kept them.

He cared about ordinary people. He showed it. His legacy won't be forgotten.

Chavismo lives! Bolivarianism is real. It's part of Venezuela's culture. It represents democratic equity and justice.

Venezuelans have the real thing. It reflects Simon Bolivar's vision. He defeated the Spanish. He liberated half of South America. He advocated using national wealth responsibly, fairly and equitably.

He strove to overcome the imperial curse. It "plague(d) Latin America with misery in the name of liberty," he said.

Chavez was his modern-day incarnation. Chavismo reflects Bolivarian principles. He established them. They're hardwired. They won't change. Venezuelans deplore their ugly past. They won't go back.

Chavez was the rarest of political leaders. He was the exception proving the rule. He cared more about people than power. He had much more to do.

New leadership will advance his progressive agenda. Maduro's up to the challenge. He'll surprise people. So did Chavez.

James Petras said "(n)o President in the history of Venezuela (or the Americas did) more to create a sense of national identity."

"He has defended the country with valor and integrity. He has preserved and advanced democratic institutions against US and client attempts to destabilize and destroy the constitutional order."

He "created an extensive social welfare net which has raised millions from poverty, eliminated illiteracy and provided a universal free public health system."

He "successfully engaged in consequential international economic aid programs, providing oil at reduced cost to poor countries in Central America and the Caribbean."

Chavez tread carefully doing it. He accomplished wonders in 14 years. Petras urged him to do more. Control the commanding heights, he said. Above all he stressed banking and finance. Money power matters most.

"Regulation of central banking, the monetary system, foreign currency, the financial and capital market system and the issuance and mintage of currency."

"The monetary competence of National Authority shall necessarily be exercised exclusively by the Venezuelan Central Bank (BCV)."

Its "fundamental objective....is to achieve price stability and preserve the internal and foreign exchange value of the monetary unit."

"The Venezuelan Central Bank is a public-law juridical person with autonomy to formulate and implement policies within its sphere of competence."

Article 319 says it "shall be governed by the principle of public responsibility."

"Failure to do so "shall result in removal of the Board of Directors."

It "shall be subject to oversight by the Office of the General Comptroller of the Republic..."

Under Venezuela's 2010 Organic Law on the Domestic Financial System, banks, insurance companies, brokerage firms, and other financial institutions "have the obligation of collaborating with sectors of the productive, popular communal economy through healthy financial intermediation, inspired by the spirit of productive transformation."

In other words, their mandate includes funding traditional economic sectors. They're also responsible for social and communal production entities and related organizations.

Venezuelan law mandates its central bank to adapt its "legal, administrative and functional structure to the goals of the production model, and the Central Bank may not be detached from the actual needs of the economy."

Its operations must "meet the objectives of a socialist state." It's the law of the land in a mostly private economy.

Millions of Venezuelans mourn Chavez's passing. His body lies in state. It's in Caracas' Military School. It's in a half-open casket.

A Friday state funeral is planned. Heads of state will attend. So will numerous other dignitaries. Expect many there. Venezuelans chant "Chavez lives. The struggle goes on."

At the request of Cuba's UN ambassador, the Human Rights Council declared one minute of silence. It did so on March 6.

A Community of Latin American and Caribbean States (CELAC) declaration expressed "profound solidarity with the people and government of the sister Bolivarian Republic of Venezuela, and particularly with the family and friends of comandante Chavez."

"It's difficult to accept this painful event. His passing moves all of us. An exceptional, extraordinary, respected, and admired man at a world level has stopped physically existing."

In March 2006, I wrote Chavez an open letter. It was long and detailed. It expressed support. I explained who I am. I told him why I care.

I said what he already knew. Dark forces targeted him for removal. I told him to take precautions. He didn't need me to explain.

"I champion all you've done and tell people who'll listen if you ever tire of ruling Venezuela," we need you in America.

"Your spirit and glorious revolution" inspire me. Keep it flourishing, growing and spreading, I urged.

I support you openly, I said. I hope you'll "survive and succeed unimpeded." God bless. Most sincerely. Steve Lendman.

"When imperialism feels weak," he said, "it resorts to brute force."

"The attacks on Venezuela are a sign of weakness, ideological weakness."

At the January 2005 World Social Forum, he said:

"It is impossible within the framework of the capitalist system to solve the grave problems of poverty of the majority of the world's population."

"We must transcend capitalism. But we cannot resort to state capitalism, which would be the same perversion as the Soviet Union."

"We must reclaim socialism as a thesis, a project, and a path…a new type of socialism, a humanist one, that puts humans and not machines or the state ahead of everything."

"Just look at the internal repression inside the United States, the Patriot Act, which is a repressive law against U.S. citizens."

"They have put in jail a group of journalists for not revealing their sources. They won't allow them to take pictures of the bodies of the dead soldiers, many of them Latinos, coming from Iraq. Those are signs of Goliath's weaknesses."

"The future of the north depends on the south."

"If we don't make that better world possible, if we fail, and through the rifles of the US marines, and through Mr. Bush's murderous bombs, if there is no coincidence and organization necessary in the south to resist the offensive of neo-imperialism, and the Bush doctrine is imposed upon the world, the world will be destroyed."

"Everyday I become more convinced, there is no doubt in my mind, as many intellectuals have said, that it is necessary to transcend capitalism."

"It must be done through socialism, true socialism, with equality and justice."

"I'm also convinced that it is possible to do it under democracy, but not in the type of democracy being imposed by Washington.

"We have to re-invent socialism. It can't be the kind of socialism that we saw in the Soviet Union, but it will emerge as we develop new systems that are built on cooperation, not competition."

"Privatization is a neoliberal and imperialist plan. Health can't be privatized because it is a fundamental human right, nor can education, water, electricity and other public services."

"They can't be surrendered to private capital that denies the people from their rights."

"The grand destroyer of the world, and the greatest threat….is represented by US imperialism."

"Let the dogs of the empire bark. That's their job. Ours is to battle to achieve the true liberation of our people."

He called him a "drunk," a "sick man, a psychologically ill man."

At the UN in 2006, he called Bush the "Devil. The Devil is right here at home. The Devil, the Devil himself, is right in the house."

"And the Devil came here yesterday….Right here. And it smells of sulphur still today."

He "came here talking as if he owned the world. Truly. As the owner of the world."

In 2010, he told Hillary Clinton to resign. "It's the least you can do. Resign, along with those other spies and delinquents working in the State Department."

In 2011, he said Gaddafi "will be remembered as a great fighter, a revolutionary and martyr. They assassinated him. It is another outrage."

After his October 2012 reelection, he said he'd deepen socialism. He'd do so in the next six years. Many problems need addressing, he stressed. He promised to keep working to alleviate them.

Two weeks before his death, he returned home from Cuba. He told supporters "We have arrived again in Venezuela. Thank God. Thanks to my beloved country."

On March 5, he passed. Chavismo lives!