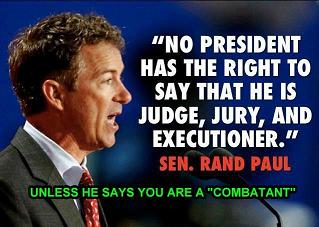 I'm sure I will get a lot of people mad at me because people have a belief in Rand but the facts are the facts and I do not give people a free pass because they do some good things.

If you read the description I do give him credit for bringing awareness to the done problem but Rand is distorting the truth on whether the President can drone Americans.﻿
If he stood there 13 hours and advocated NO AMERICAN could be droned to death and the Administration agreed then I would have mad respect but that was not the case. He quit for political capital PERIOD
I say Filibuster FAIL because he did not accomplish what I believe he was ultimately trying too do but ran around claiming that he did.

Let me say I think Rand Paul is doing a good job and I like him but that does not give one a fee pass to compromise, lie or distort things in my book. Because perception is reality what he accomplished yesterday was good in some ways but also bad in others.

In my opinion you can't be a half ass "due process patriot" or claim the constitution in a strict way when it's convenient or politically correct at the moment.

People can be labeled "combatants" by anyone but that does not mean they are waging war on America and allowed to be droned by the President and condoned by Senator Paul. Due process 5th amendment rights do not magically disappear for "American citizen" because he is labeled a "combatant" by the "decider."

Many people are labeled felons everyday by lying prosecutors and cops but they have the opportunity to free themselves of that government label in court. What if the Prosecutors were giving the authority to drone you?

The 5th Amendment does state that the government can capture and hold you (American Citizen) during "war-time" or in cases of  "public danger" but it does not say is can kill you with a drone.

Very convenient for them if they just claim they are at perpetual war with the American people :)

Article 1 Section 9:
The privilege of the Writ of Habeas Corpus shall NOT be suspended, unless when in Cases of Rebellion or Invasion the public Safety may require it.
Remember a "Rebellion is an "organized" effort to overthrow the government.


Article 3 Section 3:
Treason against the United States, shall consist only in levying War against them, or in adhering to their Enemies, giving them Aid and Comfort. No Person shall be convicted of Treason unless on the Testimony of two Witnesses to the same overt Act, or on Confession in open Court. The Congress shall have Power to declare the Punishment of Treason, but no Attainder of Treason shall work Corruption of Blood, or Forfeiture except during the Life of the Person attainted.

Maybe Paul has a grand scheme but I don't think the men in charge are that stupid to not know what that scheme is. I do however appreciate him bringing awareness to the drone problem.

"....or in adhering to their Enemies, giving them Aid and Comfort...."

That is what they used to get Dr. Mudd at his military tribuneral.

Pretty much true 4409.  Dog and pony show continues with fake outrage directed at him by the old guard GOP (McCainiac and Lindsey).