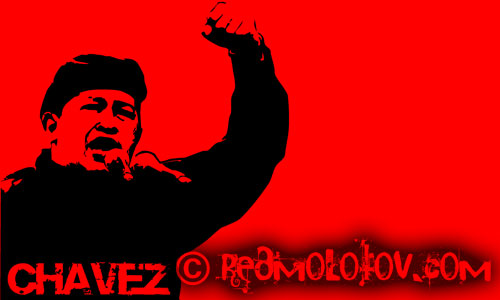 He stuck a thorn in the lion**Q**s paw
Chavez: Visionary Leader Extraordinaire

He and Castro matter most. They don't come any better. They transformed their countries responsibly. Doing so made the impossible possible. They did it against long odds. They won over hearts and minds.

Castro did it his way. Chavez chose a Venezuelan model. He envisioned socialism for the 21st century. He wanted it based on "solidarity, fraternity, love, justice, liberty and equality."

He wanted it built bottom up. He deplored top down. Popular protagonism over bureaucracy was policy.

He abhorred neoliberal harshness. He called it incompatible with democracy. He wanted another way. His legacy reflects his accomplishments.

Venezuelans loved him. So did millions worldwide. They did so for good reason. He cared. He made a difference. His achievements are remarkable. They can't be ignored.

He was honest, said Golinger. His roots were humble. He grew up in a mud hut. He sold candies on streets. He did so to earn money for his family.

He "dreamed of building a strong, sovereign nation, independent of foreign influence….He dreamed of improving the lives of his people…."

He wanted poverty eradicated. He wanted a better life for Venezuelans. He called it el buenvivir (the good life).

He made dreams come true. He achieved remarkable changes. They're more than just numbers. He transformed one of Latin America's most unequal countries into its most equitable. At the same time, he achieved impressive economic growth.

He did so in 14 years. He spoke truth to power. He did it because it matters.

He cared about Venezuela's most disadvantaged. He lifted them from poverty. He provided education, healthcare, affordable food, housing, and hope.

"He recognized the rights of the disabled, of indigenous peoples, all genders and sexualities. He broke down barriers of racism and classism and declared himself a socialist feminist."

"He not only made his own dreams come true, but he inspired us all to achieve our fullest potential."

"I am just a soldier," he said. America wanted him dead. Bush failed several times to remove him. Obama likely killed him.

Toppling foreign leaders by coups or assassinations is longstanding US policy. William Blum's done some of the best research. His books include "Rogue State." They're must reading.

He documented dozens of successful and failed post-WW II US interventions. They include:

• toppling Iran's Mohammad Mosaddegh in 1953; it was the CIA's first successful coup after an initial failure;

Extrajudicial killings are indefensible. They're morally abhorrent. They're illegal under international and US laws.

Article 23b of the 1907 Hague Regulations prohibits "assassination, proscription, or outlawry of an enemy, or putting a price upon an enemy's head, as well as offering a reward for any enemy 'dead or alive.' "

In 1980, the Sixth United Nations Congress on the Prevention of Crime and the Treatment of Offenders condemned "the practice of killing and executing political opponents or suspected offenders carried out by armed forces, law enforcement or other governmental agencies or by paramilitary or political groups."

It urged "member states to abide by the provisions of Articles 6, 14 and 15 of the International Covenant on Civil and Political rights."

They address right to life issues. They include safeguards guaranteeing fair and impartial judicial proceedings.

The first provision of the 1989 UN Principles on the Effective Prevention and Investigation of Extra-legal, Arbitrary and Summary Executions states:

"Exceptional circumstances, including a state of war or threat of war, internal political instability or any other public emergency may not be invoked as a justification of such executions."

They "shall not be carried out under any circumstances including, but not limited to, situations of internal armed conflict, excessive or illegal use of force by a public official or other person acting in an official capacity or by a person acting at the instigation, or with the consent or acquiescence of such person, and situations in which deaths occur in custody."

"This prohibition shall prevail over decrees issued by governmental authority."

"No employee of the United States Government shall engage in, or conspire to engage in, political assassination."

"No person employed by or acting on behalf of the United States Government shall engage in, or conspire to engage in, assassination."

Post-9/11, Bush reinstituted them. Targeted assassinations again became official policy. US presidents lawlessly kill. They have diktat authority to do so. They take full advantage.

Assassinating foreign leaders and others is official US policy. Obama's kill list reflects it. Anyone can be targeted for any reason or none at all. Independent head of state are especially vulnerable.

"How did it happen that six leaders of Latin American countries which had criticized US policies and tried to create an influential alliance in order to be independent and sovereign states, fell ill simultaneously with the same disease," asked Zyuganov?

"In my view, this was far from a coincidence." He urged an internationally controlled investigation.

Interim Venezuelan President Nicolas Maduro is suspicious. He suspects an "imperialist" plot. "The old enemies of our fatherland looked for way to harm (Chavez's) health," he said.

Blum asked: "How do we know that the CIA was behind the" failed April two-day coup?

"Same way we know that the sun will rise tomorrow morning."

CIA assassins never rest. Chavez knew he was marked for death. He believed it. He said so numerous times.

Michel Chossudovsky asked if he was "the object of a targeted assassination by the Obama administration?"

"In this context, the CIA would receive orders to assassinate foreign leaders directly from the US President."

"There are secret lists of names as confirmed by US government sources."

"The orders carried out by the CIA to kill a foreign leader emanate from the US president."

The Partnership for Civil Justice Fund, ANSWER Coalition, and Liberation Newspaper want records and documents that "relate to or reference or discuss any information regarding or plans to poison or otherwise assassinate" Chavez.

They seek "(a)ll records and documents, including but not limited to, emails, letters, cables or other communications, memoranda, notes, minutes, photographs, audio recordings, video recordings, digital recordings, intelligence assessments, communications, records or other data that relate to or reference or discuss any information regarding or plans to poison or otherwise assassinate the President of Venezuela, Hugo Chavez, who has just died."

"This request in made in light of the US government's acknowledged history of knowledge and possession of information regarding, and/or participation in, attempts to assassinate foreign leaders."

People have an "urgent and compelling" right to know. At best, heavily redacted documents will follow.

Regardless of what's gotten, what known suggests direct US involvement. Bush and Obama want Chavez ousted. They wanted him dead.

Around 33 heads of state were present. In alphabetical order they include:

Argentina President Christina Fernandez was one of the first high-profile mourners to arrive. On Thursday, she flew home to Buenos Aires.

Allegedly he said Chavez "couldn't speak but he said it with his lips."

Reuters reported otherwise. It said "Chavez slipped into a coma on Monday before dying the following day of respiratory failure." An unnamed source said cancer spread to his lungs.

Venezuelans mourn. Chavez lay in state. Over two million filed past him. Many weep. Some salute. Others cross themselves. Their love and admiration are palpable.

"He was invincible. He left victorious, and no one can take that away. It is fixed in history."

He represented a threat of a good example. He was the rarest of rare leaders. He was a people's president. He broke the chains that bind.

Latin America no longer is America's backyard. Venezuelans won't ever go back. Believe it. Bolivariarism is institutionalized. It's part of the national culture. It's here to stay.