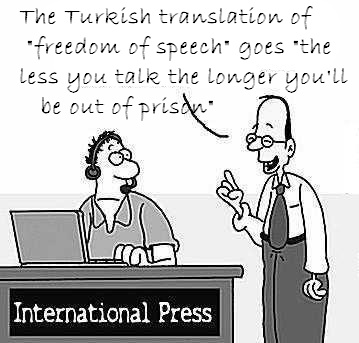 In 1998, he won the International Publishers Association (IPA) International Freedom to Publish Award. He couldn't attend the Frankfurt ceremony. Authorities confiscated his passport.

In 2003, he received the NOVIB/PEN Free Expression Award. In 2008, IPA gave him a second Freedom to Publish Award.

In March 2012, he was imprisoned. He was targeted after receiving the Assyrian Culture Centre's Assyrian Cultural Award. It honored his human and minority rights advocacy.

He's been wrongly charged with state crimes more than 70 times. He faces 15 years in prison if convicted of current terrorist-related ones. His trial begins in April.

He's one of thousands of journalists, lawyers, activists, and others accused of belonging to or aiding and abetting the Kurdistan-based Union of Communities. Turkey conflates it with the outlawed Kurdistan Workers Party (PKK).

It reported on "Turkey's Press Freedom Crisis: The Dark Days of Jailing Journalists and Criminalizing Dissent."

"(A)uthorities are waging one of the world's biggest anti-press campaigns in recent history," it said.

"Dozens of writers and editors are in prison, nearly all on terrorism or other anti-state charges. The evidence against them? Their journalism."

He denigrates free expression. As of August 1, 2012, CPJ identified 76 Turkish journalists imprisoned. They're held for what they write and say.

Charges are entirely spurious. They include "committing a crime on behalf of a prohibited organization, aiding and abetting (it) knowingly and willingly, making propaganda for (it), and (supporting) its objectives."

Other penal code provisions prohibit journalists from "breaching the confidentiality of an investigation (or) influencing a fair trial."

They criminalize independent, in-depth coverage of police and court-related activities. They impose censorship. They're used with "disturbing frequency."

At yearend 2011, up to 5,000 criminal cases against journalists were pending.

Pro-Kurdish news is called terrorism. About 70% of jailed August 2012 victims were Kurdish journalists. They're charged with aiding and abetted the PKK.

About 30% of them were charged with participating in anti-government plots or belonging to outlawed political groups.

Several were linked to an alleged Ergenekon conspiracy. Authorities call it a military coup plot to overthrow Turkey's government.

Officials say news coverage creates societal chaos. Doing so is conducive to coup plotters, they claim. They say whatever they want to say to bring charges. Spurious ones follow.

Two prominent journalists were targeted - Ahmet Sik and Nedim Sener. They were imprisoned for over a year. They were released pending completion of their trials.

At issue was Sik's new book. It's a work in progress. Authorities alleged it aided and abetted Ergenekon coup plotters.

Sener said he was targeted for his own book. It discusses government's failure to solve editor Hrant Dink's 2007 murder.

"Everyone has the right to freedom of expression," it states.

"This right shall include freedom to hold opinions and to receive and impart information and ideas without interference by public authority and regardless of frontiers."

This article shall not prevent States from requiring the licensing of broadcasting, television or cinema enterprises."

Turkey is more police state than democracy. All countries have national security concerns. Suppressing press freedom is no way to confront them.

Journalists have trouble reporting on court cases. Article 288 compromises them. It lets authorities charge them with "attempting to influence a fair trial."

Ergodan and his government "must exert the political will to abandon the systemic suppression of critical views and dismantle the country's vast system of media repression," said CPJ.

On February 5, the Central Asia-Caucasus Institute Silk Road Studies Program headlined "A House Divided Against Itself: The Deteriorating State of Media Freedom in Turkey."

More "pernicious" and "corrosive" than imprisoning journalists, it said, is "widespread self-censorship and the climate of fear." It extends across Turkish society.

Turkish newspapers have more columnists than reporters. With few exceptions, journalistic standards are low. "Little attempt is made to substantiate news reports."

What passes for investigative journalism "consist(s) of a compendium of reports and rumors selected to support the author's preconceptions."

Corroboration is lacking. Journalists rarely defend press freedom. A well-known saying goes: "The Turkish translation of freedom of speech (says) the less you talk the longer you'll be out of prison."

Authorities seized the Sabah-ATV group. At the time, it was Turkey's second largest media organization. It was sold to Calik Holding. It's owned by a close Erdogan associate.

Calik had trouble financing the deal. Two state-owned banks provided funds to do so.

DH paid dearly. It was fined over $2.5 billion. It was levied for alleged tax evasion. It responded by toning down AKP criticism. It fired outspoken journalists. Its tax fine slipped quietly under the radar. It effectively disappeared.

What's different today is AKP's power. It's unprecedented. It takes full advantage. It applies enormous political and economic pressure. It exceeds what previous governments could do.

Turkey's repressive climate is unequaled. It's most striking on television and pro-AKP broadsheets. They suppress opposing views.

They collude with security forces and police. They're the main force driving government-sponsored smear campaigns. They intimidate. They silence dissent.

They compromise rule of law principles and due process. They support wrong over right.

They call fabricated evidence real. They facilitate arrests and prosecutions. They let Erdogan govern like a tinpot despot.

Had they stood tall together and defended press freedom, he never would have been able to do it.

In July 2011, Turkey's Hurriyet Daily News foreign news editor/columnist Ferai Tinc quit. She did so saying "Reporting is not happening now. Everybody's afraid. There are only official statements, only" state-friendly journalists.

Press freedom in Turkey is Soviet-era "Pravda-like." Dozens of journalists are imprisoned for saying what authorities want suppressed.

Since Erdogan's AKP took power, Turkey's media landscape consolidated to a half-dozen pro-government conglomerates. Others face pressure and censorship to be supportive.

Ankara's Anti-Terrorist Act targets investigative journalists. It implicates them in alleged anti-government coup plots. None exist so Erdogan invents them.

Academics and artists are targeted. Some quit and leave. Others voluntarily self-censor. Otherwise they risk imprisonment. Police states operate that way. Erdogan mandates it in Turkey. He shames himself in the process.

Conflating critics with terrorists doesn't wash. Erdogen's in denial. The European Court of Human Rights says so. Guilty again, it said, for suspending the publication and distribution of newspapers critical of government policies.

"If the government is serious about its latest moves to address the Kurdish issue in Turkey, freeing the thousands of detained peaceful Kurdish political activists, journalists, human rights defenders, trade unionists, and students would be a good first step….Turkey needs to make human rights a priority in its approach to all of its citizens."

He's averse to governing responsibly. He prioritizes unchallenged power. Opposition isn't tolerated. Imprisonment is a hair's breath away. Nothing in sight suggests change.

Techno-Censorship: The Slippery Slope from Censoring 'Disinformation' to Silencing Truth