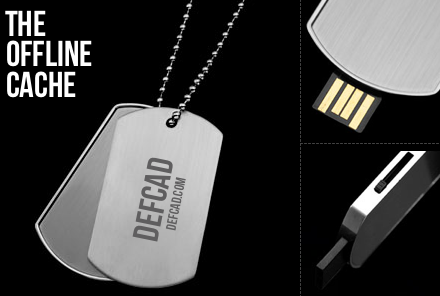 Cody Strikes Back! Changing the World, One Search, One Download at a Time.
We're building a search engine for 3D printing. Without the censorship. Fund DEFCAD Today

The DEFCAD files have been downloaded more than 400,000 times. Our next step is defcad.com: an open-source search engine for all 3D printable files, not just innocuous trinkets and garden gnomes.

Get the Offline Cache:
A DEFCAD USB dogtag.

Reserve a DEFCAD startup package now to get the Offline Cache: a USB key with every DEFCAD 3D model. Once the site gets going, we'll provide help and tutorials for printing your own 3D parts.

The defcad.com search engine source will be released on github under the AGPL license. Like Wikipedia, nightly database mirrors will also be made available via BitTorrent. Our goal is not profit maximization, it is an end to the artificial scarcity of copyright, IP, and regulation.

Hackers are persecuted by federal prosecutors while the basic needs of veterans go unmet. All purchases mediated by the defcad.com search engine will be rounded up to the nearest dollar; 50% of the proceeds will be donated to the VFW, and 50% will be donated to 4chan to support free speech on the internet.

Google's done a lot for free speech. But they made an early decision to disallow promotion of firearms, have gone on the record opposing the AGPL, and have a closed search index and codebase. Their fear of copyright infringement suits is why Youtube passed Google Video and their risk aversion on social is why they're playing catch up with Facebook. They can't be the pioneers here, because the future of 3D printing is dependent on radically open access to object files.

Makerbot is perfectly competent at hardware. And their software is fine too, especially Thingiview. But they caved to censorship, and they don't seem to realize that printed hands and pharmaceuticals are anathema to the FDA and Roche, printed cars will be opposed by the NHTSA and Ford, and printed drones will be fought by the FAA and Boeing. Makerbot won't fight those battles, which is why Thingiverse is going to be a home for trinkets and garden gnomes.

Politicians always want new regulations, patent lawyers always want to sue, and presidents want to feel important. But the mechanisms by which they impose their will are centralized structures dating from a centralized century. Once it's not a few dozen manufacturers under the thumb of the state but tens of millions of decentralized acts of civil disobedience — a patient printing artificially expensive pharmaceuticals, a South Asian woman printing to defend herself — there won't be enough jail cells in the land to hold all the thoughtcriminals.

13 Cancers Are Related to This 1 Physical Condition, and It's Only Increasing

How Batteries at Charging Locations Could Charge Every EV Faster