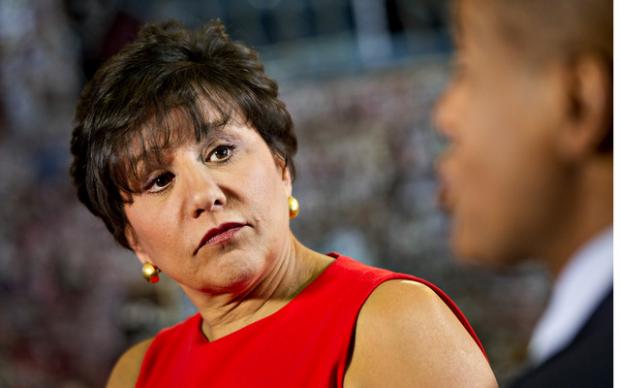 She's one of America's most powerful women. For sure she's one of the richest. Forbes estimates she's worth $1.85 billion.

She's also heir to the Hyatt Hotels and Pritzker family fortune. It's net worth exceeds $20 billion. Some think it's much more.

No one knows for sure. It's stashed in tax havens. Only little people pay what they owe. Billionaires use money to make more of it. They steal plenty along the way.

Balzac said behind every great fortune lies a great crime. Tax Justice Network estimates up to $32 trillion in hidden and stolen wealth stashed in tax havens. Maybe it's much more. No one knows for sure.

Insiders say Pritzker's Obama's top Commerce Secretary choice. Honest observers want her held accountable. She has lots to answer for. More on that below.

In February 2011, Obama appointed her to the President's Council on Jobs and Competitiveness (PCJC). General Electric CEO Jeff Immelt headed it.

He destroyed jobs at the same time. He offshored them to low wage countries. He pretended to advise Obama on creating them. He faked it. PCJC met four times. It was a sham. It accomplished nothing.

In January 2012, it was disbanded. It never should have been established in the first place. It was smoke and mirrors. It was typical Obama. It did nothing to create jobs.

She's a Council on Foreign Relations member. She belongs to other elitist groups. They're international and influential. They're comprised of likeminded figures. They're up to no good.

In its August 2008 "Power of Penny Pritzker" article, Bloomberg called her the "billionaire head of Barack Obama's fundraising machine (and) the person to call when you want to 'get the job done,' says Warren Buffett."

In 2008, she was Obama's campaign finance team national chairwoman. She raised millions. She shattered fundraising records.

She helped get Obama elected. She organized "the best financed campaign in US history," said Bloomberg. In 2012, she was a top bundler.

She was up for Commerce Secretary before. She dropped out of the running. She focused on business priorities. She had internal disputes to resolve. Billions of dollars were involved. In 2011, eleven family members settled things.

She's damaged goods. How that affects her now remains to be seen. She ran suburban Chicago-based Superior Bank. In 2001, it collapsed. It had $2.3 billion in assets.

It was a predatory lender. It was heavily into subprime fraud. Pritzker was one of its originators. Some called her the subprime queen. For others she was the doyenne of predatory lending.

Superior Bank operated a nationwide origination system. It was founded in 1988. Pritzker family members bought Lyons Savings. It was bankrupt.

They paid $42.5 million. They got $645 million in tax credits in return. They put up $1 million to get it. They got more. Sweetheart deal terms included all federally insured bank deposits.

They took full advantage. They concentrated on subprime lending. In December 1992, they acquired Alliance Funding. It was a wholesale mortgage originator.

In November 2002, In These Times headlined "Breaking the Bank," saying:

Superior had "a familiar ring. Using a variety of shell companies and complex financial gimmicks, (its) managers and owners exaggerated the profits and financial soundness of the bank."

"While (it) actually lost money throughout most of the '90s, publicly it appeared to be growing remarkably fast and making unusually large profits."

"Under that cover, (it) paid its owners huge dividends and provided them favorable loans and other financial deals deemed illegal by federal investigators."

It was a "mini-Enron." When it collapsed, Pritzker and other family members profited hugely. Borrowers and depositors were scammed.

Superior's auditor "doubled as a financial consultant." He engaged in "dubious accounting practices." He played fast and loose with numbers.

She made money the old fashioned way. She stole it. She got away with grand theft. She settled for pennies on the dollar. No one went to jail.

Retired Ameritech manager Fran Sweet lost $100,000. She called the Pritzkers "crooks. "They don't care anything about people who spent their whole lives trying to save" she said.

Many Superior depositors lost everything they had over the FDIC insured $100,000 limit.

At the time, it controlled "the $3.3 billion market in equal shares with Atlanta-based Equifax and Dublin-based Experian Group Ltd."

"After widespread consumer complaints about shoddy service in the credit checking industry, (Congress) passed legislation in 2003 that allowed people to get free copies of credit reports so they could check for mistakes and block information obtained from identity theft."

The same year, Klamath Falls, OR-based Judy Thomas won a $5.3 million settlement. She claimed TransUnion took six years to correct a mistake in her credit report. On appeal, it was reduced to $1.3 million.

In 2008, Pritzker withdrew her name from Commerce Secretary consideration. Friends say she now wants the job.

Subprime fraud taints her. Obama may choose her anyway. He's in bed with Wall Street crooks. Money power runs things. Pritzker at Commerce fits right in. She'll be one of the crowd.