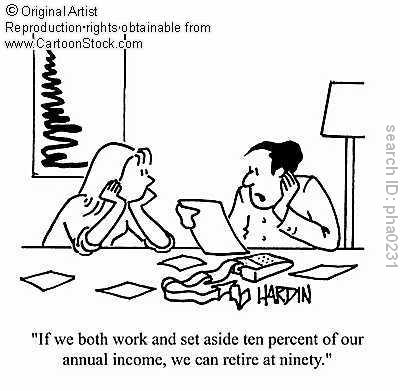 So-called "free" markets work only for those who control them. A handful of winners benefit at the expense of most others. Conditions get progressively worse.

Both sides agree. They support giving bankers, war profiteers, other corporate favorites, and super-rich elites greater wealth at the expense of most others.

One-third of US workers expect to retire at age 70 or older. Growing numbers expect never being able to do so.

Over two-thirds expect to work at least part-time past age 65. At the same time, health and economic crisis conditions keep many of them from doing so.

Nearly one-third are woefully unprepared. Their savings are less than $1,000. Many others have nothing in reserve. Around 60% have less than $25,000.

Fewer than half of working Americans calculated how much they need in retirement. About two-thirds feel they're behind schedule preparing for it.

Only 14% believe they're adequately prepared. Only one-third have defined benefit plans.

Few Americans are prepared. Three-fourths nearing age 65 have less than $30,000 saved. "For the first time in US history," she says, "every source of retirement income is under siege."

"The great 30-year experiment in 401(k) and similar retirement financing schemes that depend on stock market investments has failed."

Even before the" 2008 crash, clear signs showed "that very few workers would be able to accumulate enough wealth through these accounts to insure retirement financial security."

Since the 19th century, every generation was better off than previous ones. No longer. Institutionalized inequality victimizes most Americans. It's been that way since the mid-1970s.

Lifetime obligations exceed what most people save. Financial services industry con artists skim huge profits off the top. They do so in large commissions. They add up over time.

Most retirees face financial trouble. They're worse off than their parents and grandparents. Protracted Main Street depression conditions destroyed 40% of personal wealth.

A new Senate report says America faces a huge retirement savings deficit. It's about $6.6 trillion. It's about $57,000 per household. It's double or more what most households have in savings. It assures current crisis conditions worsening.

Based on Federal Reserve data, the Center for Retirement Research (CRR) estimates 53% of US workers aged 30 or older woefully unprepared for retirement.

Alicia Munnell serves as CRR director. "There is a mismatch between retirement needs rising and retirement benefits contracting," she says.

Current conditions are polar opposite earlier ones. From Social Security's 1935 enactment through the mid-1970s, things improved for most Americans.

No longer. Most people are increasingly on their own. They're woefully unprepared. They earn and save too little. Trouble awaits them later on. Dire economic conditions exacerbates things.

Benefits go largely to upper-income households. The system is rigged for them. It's done at the expense of most others.

Workers receiving $20,000 and contributing the same percentage get nothing. They don't earn enough to qualify. Others earning $50,000 get about $2,100.

Workers in defined benefit plans face uncertainty. They're underfunded and eroding. Benefits are frozen and disappearing.

Public pensions have similar problems. They're being looted. They're targeted for eventual elimination. They may be gone in another decade or sooner.

One worker spoke for others. He's aged 60. He thought he'd be comfortable in retirement. In 2002, he was laid off. "People talk about a lost decade," he said. "That's what I've been through," he stressed.

He spent the last 10 years struggling. He was in and out of low pay/poor benefit/part-time contract jobs. He drained his savings to get by. Doing so excludes retiring when he planned.

America is rife with corruption and gangsterism. The criminal class in Washington is bipartisan. Kleptocrats run things. They're complicit with corporate crooks. Poverty, unemployment, hunger and homelessness are at near record levels.

America's unfit to live in. It's unprincipled and morally reprehensible. It force-feeds hard times. The worst by far is yet to come.