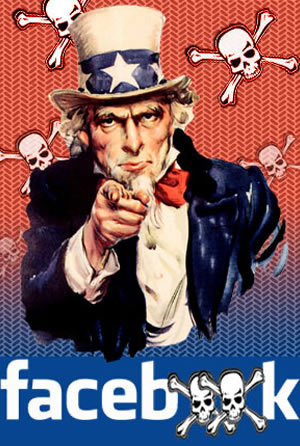 The lunacy in Washington continues.

While Facebook raked in $1.1 billion in pre-tax profits from U.S. operations last year ... Washington told them not to worry about paying taxes on it.

As a matter of fact — instead of paying taxes — the Federal Government handed them a check for $429 million in tax refunds.

And at the same time the big boys like Facebook are bringing in huge piles of cash with ZERO taxes, while hard working Americans like you and I are paying tax rates of 15%, 28% ... even 35%!

All to the tune of about $1.1 trillion each year.

I don’t know about you, but it makes me hot under the collar when a multi-billion dollar company like Facebook — making over $1.1 billion a year — is coddled by Washington ... and given FREE money for an accounting trick on employee stock options.

Oh yeah. And just to rub a little salt in the wound ... Facebook’s COO Sheryl Sandberg happily announced that her company “ended the year with a total of $5.8 billion in net tax loss carry forwards” from compensating employees with billions in stock.

That means Facebook’s accounting trick — authorized by power brokers in Washington — will help them avoid paying ANY taxes for the next FIVE years.

They’ll simply use their paper losses to paint over massive revenues ... and they’ll skip off into the sunset while you and I are left holding the bag. This is financial chicanery at the highest level.

But in all fairness, I have to say ... don’t blame Facebook or its executives.

Why? Because they’re only doing what they were told they COULD do.

You see there is a much more sinister group at play here. And they are much more powerful than the denizens of Wall Street, Silicon Valley, or Corporate America.

And right now this ultra-secretive Washington cartel is orchestrating nothing short of a financial coup de grâce ...

A killing blow that will bring the United States to its knees ...

Soon, you could see your bank accounts plundered by smiling, fat cat bankers ...

And watch as all your life’s work is siphoned into the pockets of the financial elite ...

The homeless will pour into the streets ...

The violence will bring about an explosion in the military state, as armies of police forces are created to manage the chaos.

You’ll see our government explode in size — seizing control of prices, food, and begin a new era of state rationing.

And this is no exaggeration.

This group of 4 men and 3 women are, arguably, the most dangerous people in the world.

They exist outside of the Constitution.

They answer to no government body.

They’ve never even been elected to office!

And yet they will go down in history as the architects of what can only be called America’s doomsday.

After this, nothing in your life will ever be the same again.

In my free video — "BLOOD MONEY" —
I reveal the truth that these
ultra-powerful men and women
DO NOT want you to know:

I expose the shocking truth; how they are methodically destroying your wealth and your future.

More importantly, I reveal what you must do — beginning immediately — to protect yourself, your family, your liberty and your money ...

And even to grow wealthier as this crisis unfolds.

Plus, I give you three simple steps you can take to get yourself and your loved ones through this crisis in safety and comfort.

And at the end of this shocking video, I name two specific investments that are designed to positively explode in value due to this crisis — generate gains of up to 161.8% — and probably much more — in the months ahead.

This video is absolutely free to view; no strings attached.

“BLOOD MONEY” may be taken offline without notice at virtually any time.The facts in this video are so shocking, they will be offensive to some viewers.

You owe it to yourself and your family to get the facts ... to insulate your wealth ... and to harness this unprecedented event to multiply your wealth:

Yours for Freedom and Prosperity,