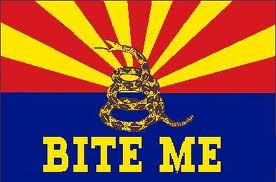 The Senate is expected to vote very soon on a Universal Background Check Bill.

The bill would require that you get the government's permission to buy or sell one of your guns, and our Arizona Senators have expressed support for such a bill.

The bill is expected to be introduced by Senator Charles Schumer, one of the most rabid anti-gun legislators in America.
Here's why we should oppose any bill requiring Universal Background Checks:

1. It is an attempt to record every sale of every gun sold in America.

The registry and the database the government creates with the Universal Background Check law will likely become the list for future taxation, regulation, restriction and possible confiscation of all privately owned firearms in America.

2.There is no effective mechanism for individuals who wish to sell their firearms to conduct a federally-mandated background check.
Many large retailers such as WalMart have already said they will support a Universal Background Check bill but only if they are not legally required to conduct private-party background checks. Very few licensed firearms dealers will be willing to conduct the background checks for private sellers because the time and expense of doing the checks interferes with their own business

3. The government needs to enforce existing laws before putting more laws on books that restrict the rights of law-abiding American gun owners.

PLEASE CONTACT BOTH OF YOUR SENATORS TODAY AND EXPRESS YOUR OPPOSITION TO ANY BACKGROUND CHECK BILL.

1 Comments in Response to SPECIAL TO ALL ARIZONA GUN OWNERS - From Bob Templeton, Crossroads Gun Shows

"3. The government needs to enforce existing laws before putting more laws on books that restrict the rights of law-abiding American gun owners."

Bad idea. All current gun "laws" restrict the rights of Americans, and "law abiding" means exactly whatever government says it does... which already prohibits millions of Americans from owning the tools with which to defend themselves.

Laws do nothing to PREVENT crime, and can only be used to deal with aggression after the fact.  What is really needed is a complete repeal of every single gun "law" - and all others that are not simply about murder, rape, theft and fraud.

href="http://www.thepriceofliberty.org/?page_id=848">I carry a gun –
Get over it