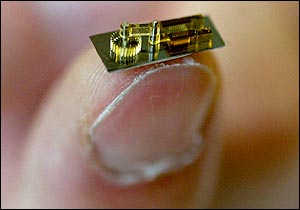 SCIENTISTS have built the smallest petrol engine, tiny enough to power a WATCH.  The mini-motor, which runs for two years on a single squirt of lighter fuel, is set to revolutionize world technology.  It produces 700 times more energy than a conventional battery despite being less than a centimeter long (Not even half an inch!).

It could be used to operate laptops and mobile phones for months doing away with the need for recharging. Experts believe it could be phasing out batteries in such items within just six years. The engine, minute enough to be balanced on a fingertip, has been produced by engineers at the University of Birmingham .  Dr Kyle Jiang, lead
investigator from the Department of Mechanical Engineering, said: “We are looking at an industrial revolution happening in peoples’ pockets.

The breakthrough is an enormous step forward.  Devices which need re- charging or new batteries are a problem but in six years will be a thing of the past..”  Other applications for the engine could include medical and military uses, such as running heart pacemakers or mini reconnaissance robots.  At present, charging an ordinary battery to deliver one unit of energy involves putting 2,000 units into it.

The little engine, because energy is produced locally, is far more effective.. One of the main problems faced by engineers who have tried to produce micro motors in the past has been the levels of heat produced. The engines got so hot they burned themselves out and could not be re-used.  The Birmingham team overcame this by using heat-resistant materials such as ceramic and silicon carbide.

Professor Graham Davies, head of the university’s engineering school, said: “we've brought together all the engineering disciplines, materials, chemical engineering, civil engineering, and mechanical engineering.  What better place to have the second industrial revolution in nano-technology than where the first took place, in the
heart of the West Midlands.

SOME PEOPLE THINK THEY ARE MACHINISTS ... AND SOME REALLY ARE!

For all you out there who like big, honking V-8's and screaming' V-12 engines, check out these tiny versions that you could run on your workbench or kitchen table.  These models were built by craftsmen the same way the big ones are made by machining billet stock and castings, but in miniature. These are not just models that look like engines, they are real running engines.  Some of these photos were taken from the Joe Martin Foundation Craftsmanship Museum but many more images can be found elsewhere on the web, and engines like these can be seen in person at model engineering shows around the country. (Underlined words in the text are links to related sites.)  Here are some really nice examples: 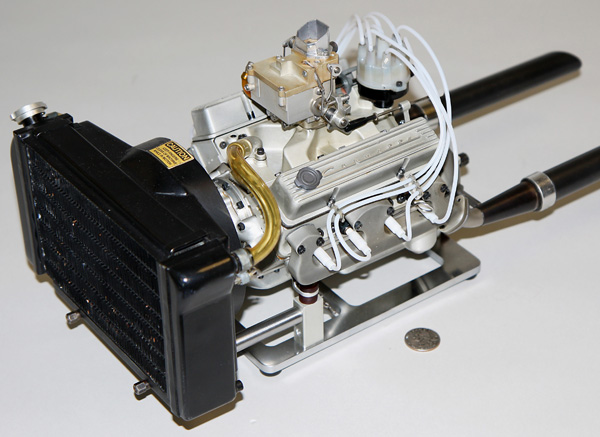 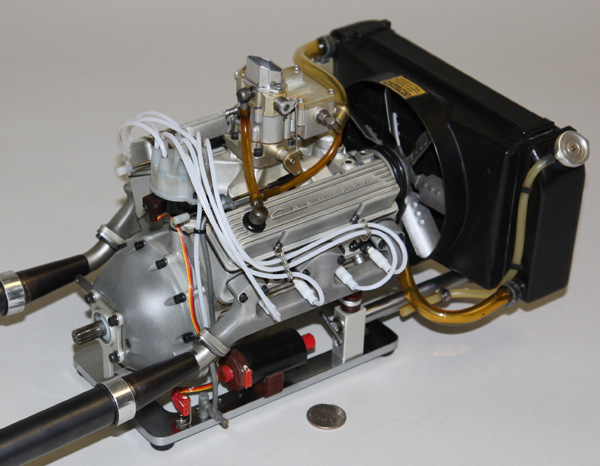 The late Lee Root built this scale Corvette engine.  The major components were machined entirely from solid billet aluminium that has been bead blasted to look like castings, and it will turn 18,000 RPM!  The coin you see in some of the photos for size reference is a US Quarter.  The valve covers are just 4-1/2" long, and the miniature spark plugs are commercially available. 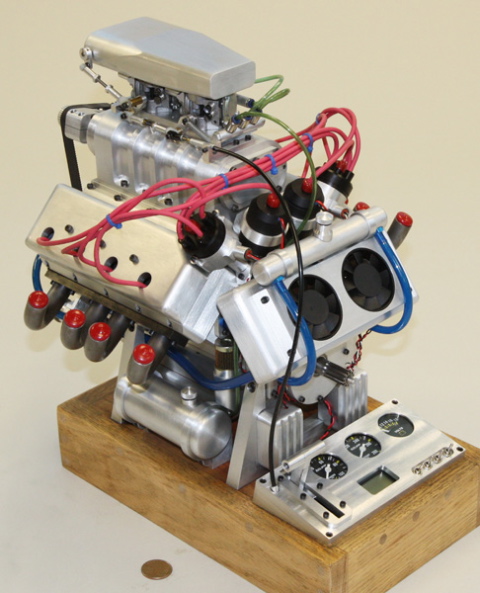 This 1/3 scale billet machined, supercharged Chrysler 300 Hemi racing engine from the 1960s was built by James Weber. It has a 1.0" bore and 0.90" stroke displacing 5.65 cubic inches.  The engine burns gasoline or methanol (methyl alcohol) on dual electronic spark ignition and incorporates a two-stage pressurized dry-sump lubrication system.  It will turn around 12 grand and uses a couple of computer cooling fans on the radiator to keep things cool.  Note the professional looking throttle and gauges on the stand. 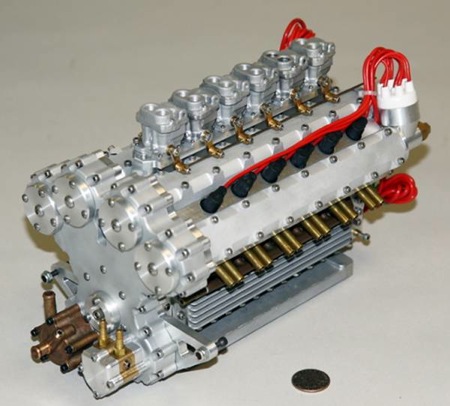 Here's a V-8 and a half; a scale Ferrari V-12 by Jeron Classic Motors. It has double overhead camshafts, burns methanol on glow ignition and is equipped with two oil pumps for dry sump lubrication.  All six carburettors function and are linked together for smooth operation.  The heads and block are about 7-1/4" long.  Only a few of these were made before the company went out of business, so it's pretty rare.  Like many of the engines you see here, it is on loan to the Craftsmanship Museum courtesy of Paul and Paula Knapp and their Miniature Engineering Museum. 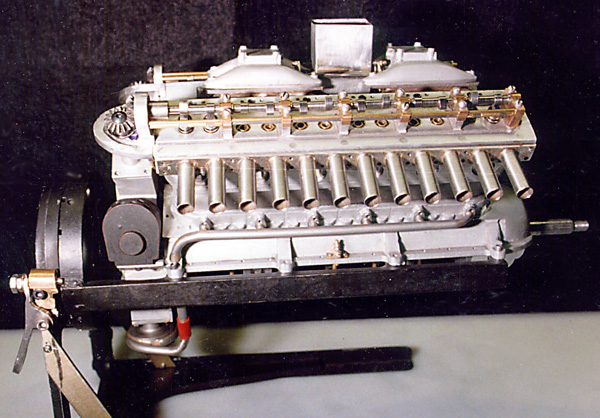 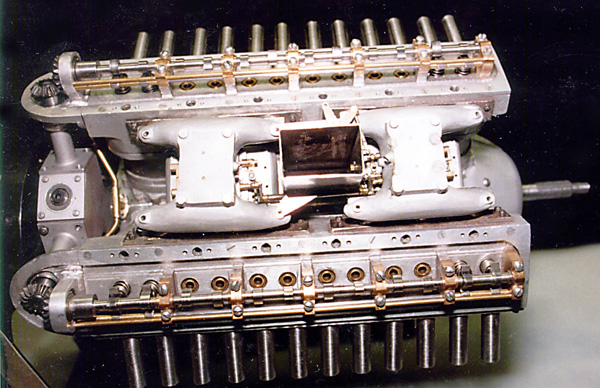 Here's another twelve.  The late Al Ingersol built this Curtiss D-12D 1/6 scale V-12 airplane engine completely from billet stock and also built a model Curtiss Wright P 6E biplane to put it in.  The engine is only 9" long and weighs 6 pounds.  It has a 0.80" bore and 1.062" stroke, displacing 6.46 cubic inches.

One of the more popular model V-8 engines over the years has been the Challenger.  This one was built by Ron Colonna. Casting kits are still available for this 1/3 scale engine through Coles Power Models, although it is definitely not a beginner project.Several V-8 engines by Ken Hurst are displayed at a model engineering shows like the recent Western Engine Model Exhibition (WEME) in Vallejo , CA .  How about that supercharger!  Behind the first engine is his blue
Challenger V-8. The 103 cc engine sounds great running on a mixture of white gas and high octane racing fuel.

Eugene Corl built this 1/3 scale Chevy V-8 using engine castings he produced himself.  The engine is seen here at the Gas Engine Antique Reproduction Show (GEARS) in Portland , OR. 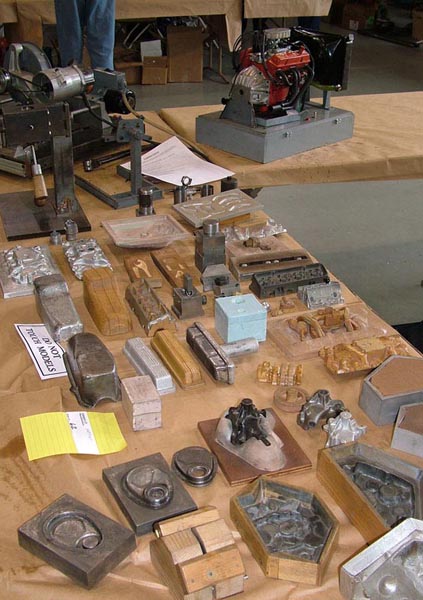 Seen above are some of the wooden patterns, moulds, cores and raw castings that had to be made to build Gene's 1/3 scale Chevy V-8.  Once cast, the parts must be precisely machined just like real engine components.  When you look at one of these finished little engines, keep in mind all the planning, preparation, fixturing and behind-the-scenes work that goes into making one. 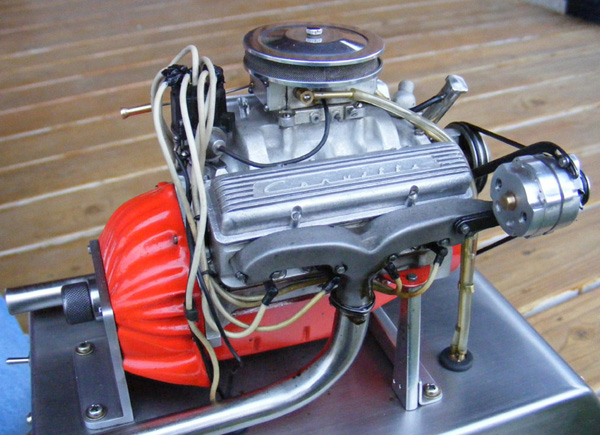 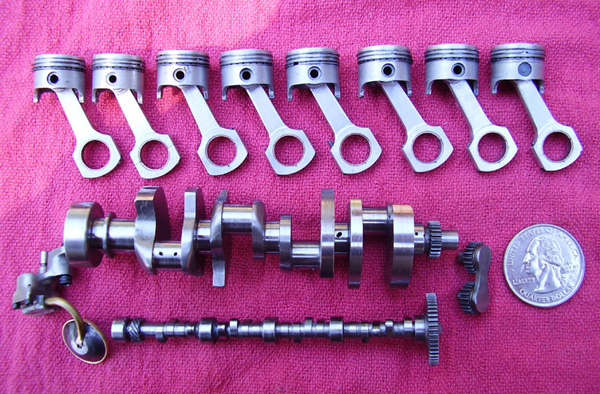 The three photos above show the world's smallest known running Chevrolet V-8.  Jim Moyer built this 1/6 scale version of a 1964 365 HP Chevrolet Corvette 327. Note the tiny firing order cast into the intake manifold just like on the real thing.  The heads and block are machined from billet aluminium.  Jim even made stamping dies to make the oil pan, rockers and front cover.  The valve covers are investment cast. 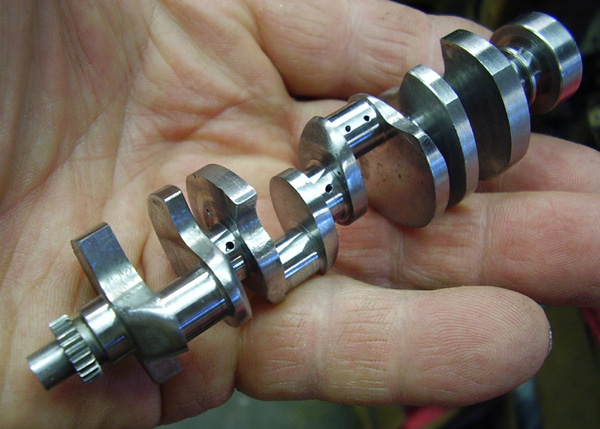 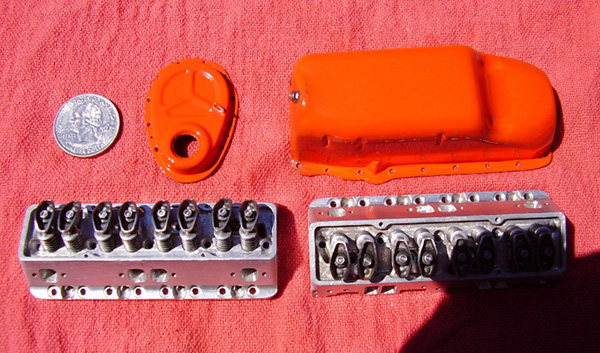 Here you can see the cylinder heads of the Moyer 327 plus the stamped oil pan and front cover.  Some parts inside the engines are made to scale like the 30-30 Duntov camshaft, but some things have to be modified to make a small engine run.  Electricity and fuel molecules don't scale, so some parts have to be slightly heavier or larger than exact scale would dictate.  Getting a small engine to run requires skill and careful work; getting one to run well is an art. 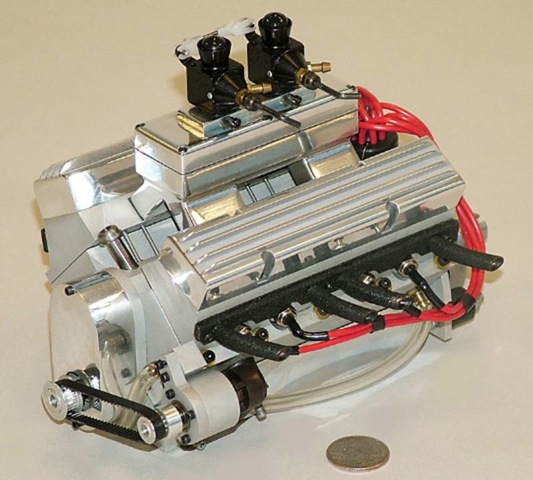 Gary Conley came up with the scale Conley V-8 in the 1980's. This version has twin carbs.  You could buy it as a kit or as a completed engine.   Gary is now building what he calls the "Stinger 609" V-8 that will soon be available as a complete running engine.  A supercharged Stinger 609 running in a 1/4 scale dragster. Impressive! 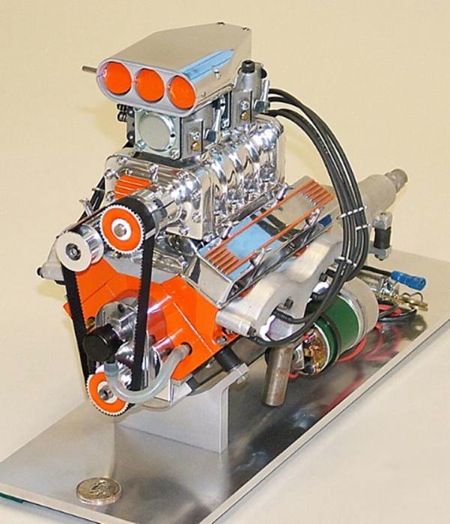 Paul Knapp built this great looking version of the Conley V-8. It runs twin carbs on a fully functional Roots style 671 blower and will turn 12,000 RPM on methanol. Note the nicely painted and highly polished finishes on this beautiful engine.  (Did you notice that the ignition switch even has its own set of keys like a real engine?)

A Cirrus V-8 by Profi M.E. of the Ukraine is based on the Merritt
Zimmerman design.  The exposed rocker arms need to be manually lubricated before running the engine. Again, note the really nice finishes on every part. 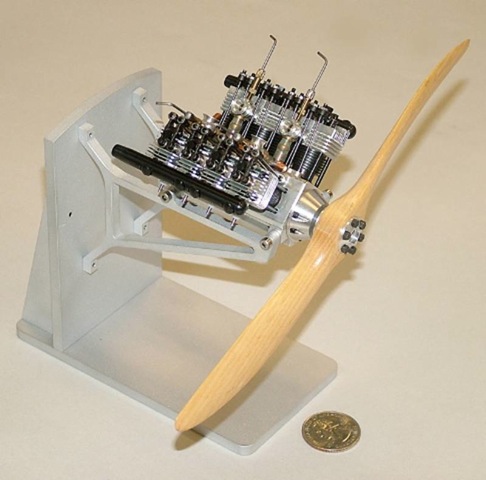 This is one of only six air-cooled Micro Cirrus 1/12 scale V-8s produced by Profi M.E. using the components from a run of 4-cylinder Micro Cirrus engines. Six water-cooled versions were also built.  The cylinder heads on this rare V-8 are only about 2" long.  Note the size of the quarter at the bottom of the photo. This thing is TINY! 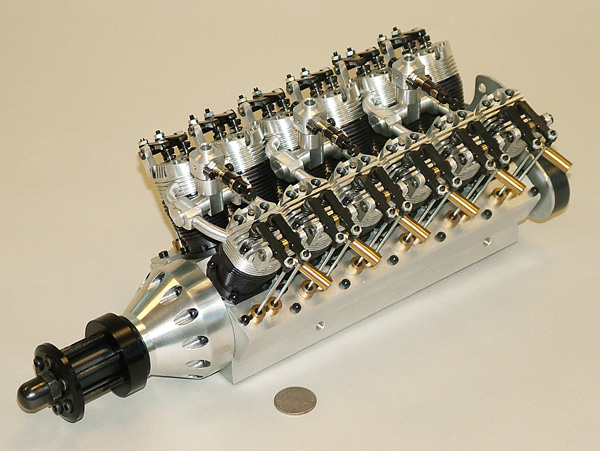 Donna I know the article is under the heading "Just for fun" but it's a pity you lump this farce (Smallest petrol engine) in with genuine miniature engines that DO Exist, and actually run, made by real craftsmen.

How about one of those little Chrysler Hemi, Corvette, or Ferarri engines being mated with a transmission suitable for powering a moped?  A lot of those low-powered bikes are running on 49cc engines that are smaller than these, and I am certain they are less powerful also.  These little masterpieces of engineering skill ought to get put into mass production and put to widespread uses.