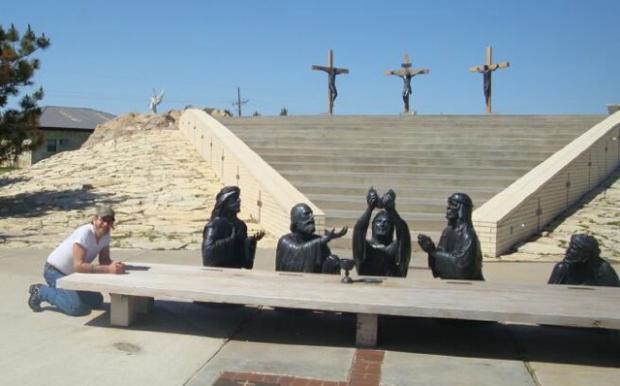 Happy Easter!
There is always someone stopped here to visit, pray, or meditate.
Trucks, buses, or single vehicles.
Groom is a tiny town on I-40,
But it gets lots of visitors because of this.

This is really beautiful

(This must have been an awesome labor of love.)

Read message at the end of pictures!

These are the pictures of the crucifixion of Christ sculptured from metal by a man near Amarillo, Texas.

The crosses are made of metal also. The man did this out of the kindness of his heart.

Someone donated the land on which to erect them.
Who is Jesus?
HE IS JESUS
WHO IS HE?
IN CH EMISTRY, HE TURNED WATER TO WINE.

IN BIOLOGY, HE WAS BORN WITHOUT THE
NORMAL CONCEPTION;

IN PHYSICS, HE DISPROVED THE LAW OF
GRAVITY WHEN HE ASCENDED INTO HEAVEN;

IN ECONOMICS, HE DISPROVED THE LAW
OF DIMINISHING RETURN BY FEEDING 5000 MEN WITH
TWO FISHES & 5 LOAVES OF BREAD;

IN MEDICINE, HE CURED THE SICK AND THE
BLIND WITHOUT ADMINISTERING A SINGLE DOSE OF DRUGS,

IN HISTORY, HE IS THE BEGINNING AND THE END;

IN GOVERNMENT, HE SAID THAT HE SHALL
BE CALLED WONDERFUL COUNSELOR, PRINCE OF PEACE;

IN RELIGION, HE SAID NO ONE COMES TO
THE FATHER EXCEPT THROUGH HIM;

JOIN ME AND LET'S CELEBRATE HIM;
HE IS WORTHY.

THE EYES BEHOLDING THIS MESSAGE SHALL
NOT BEHOLD EVIL, THE HAND THAT WILL
SEND THIS MESSAGE TO EVERYBODY SHALL
NOT LABOR IN VAIN,
AND THE MOUTH SAYING AMEN TO THIS PRAYER SHALL SMILE FOREVER.
REMAIN IN GO D AND SEEK HIS FACE ALWAYS.
AMEN

IN GOD I'VE FOUND EVERYTHING!

The Greatest Man in History
Jesus had no servants, yet they called Him Master.
Had no degree, yet they called Him Teacher.
Had no medicines, yet they called Him Healer.
He had no army, yet kings feared Him..
He won no military battles, yet He conquered the world.
He committed no crime, yet they crucified Him.
He was buried in a tomb, yet He lives today.
I feel honored to serve such a Leader who loves us!
If you believe in God and in Jesus
Christ His Son . send this to all on
your buddy list.
If not just ignore it.
If you ignore it, just remember that
Jesus said
'If you deny me before man, I will deny you before my Father.