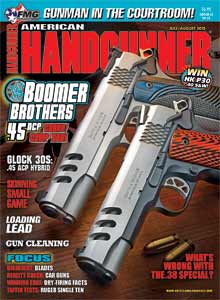 This nation was founded on principles I believe most of the public still cherishes, despite elections and superficial media-instigated disputes. The kinds of human liberty we invented grew the most abundant and successful society the world has ever seen by far, lifting people from poverty (the natural state of humanity) into abundant prosperity and happiness — which was created through hard work and lofty goals. Can resurgence of that American spirit help in the fight to protect the right to keep and bear arms?

If the deep philosophy of freedom takes hold again, and washes away the statism (reliance on the state) and ugly collectivism that has eroded it, our gun rights will have the very natural and robust support they can sorely use.

When you jump up and down about the Second Amendment, and your buddies jump up and down with you, you make the antirights mob and their ignorant followers jump up and down about blood in the streets and shootouts at traffic jams. You can’t blame them really; they’re ignorant, pounded daily by a belligerent and biased “news” media, a victim of their own irrational fears. They’re a product of government schools teaching the statist message on everything, including an antigun rights mantra, instead of a message of freedom and abundance. But when you harangue people about the whole Bill of Rights instead, and human liberty, they also jump up and down. Is there something there we can use?

Just what is this philosophy of freedom? It is knowing humanity’s greatest achievements occur when people are as free as possible to pursue their self-interest. Adam Smith figured that out in 1776, calling it Wealth of Nations, a book still in print. The idea is the more you are left alone, the more you can accomplish, and the better for society.

By peeling away the restrictions of government’s laws and regulations, you end up with a small government of limited powers. That’s what our Founders sought, recognizing the bigger government gets, the more powers it claims and the worse for the public it governs. In the elegantly simple words of political activist Ernest Hancock: Freedom good, government bad, bad, bad, bad … bad.

Will this resonate with everyone? No, of course not. The “takings coalitions,” those people who have attached themselves to government handouts, entitlements, funding programs and other leach-like redistributions of the wealth we earn will be extremely reluctant to roll back the clamps government has on all of us, from gun rights to taxation (where true representation is almost non-existent).

The philosophy of freedom is built on principles supporting gun rights and all human rights, in direct opposition to towering government control over you. A free person can own arms and slaves cannot. A free person bears arms in direct opposition to government power and a government detests that balance of power. Just look at any tyrannical regime for proof of principle here. To the extent this shifts the mindset of your friends, community and officials, our goals as marksmen advance, and the repression of government recedes.

The fundamental tenets of freedom include: less government is better government; government of limited powers is best; individual responsibility and enterprise are goals; free markets with low taxation are prized and the right to keep and bear arms is sacrosanct.
Now don’t confuse this with pure libertarianism, a marginal political approach with no borders, no central banks, no control over drugs, unbridled prostitution (which we practically already have in Congress!), there’s just no way that dog can hunt. And the idea of a libertarian party is a flat-out contradiction in terms.

But if a libertarian-type set of principles were to make headway into the mainstream parties — government governing least governs best, just leave us alone, delegated powers only — the groundwork for a return to the philosophy of freedom would be set, and the entire nation would benefit.

You can do this with a simple single phrase. Does it maximize freedom? Ask that about every new law. When you see a legislator, or hear a proposal, ask yourself, does it maximize freedom? If it doesn’t — and you’ll be amazed how rarely it does — say so. “Mr. Legislator, that does not maximize freedom, so I would be against it on principle — and you should be too.” Watch their faces. They’re slow, but eventually, they will start to get it. Especially when we dump the ones who minimize freedom. The ones who’d regulate everything? They have no place in our government.

Get your hands on a copy of Common Sense by Thomas Paine. In print for centuries, it remains a glorious outline of why freedom works. Read The Law, by Frederick Bastiat, to grasp the purpose and limits of what law can do, and why it must be strictly contained. Shift some of your focus from guns specifically to freedom generally, and both will advance. Think freedom.

Alan Korwin’s company Bloomfield Press is the largest publisher and distributor of gun-law books in the country, featuring plain-English descriptions of state and federal gun laws for the public. He invites you to write to him at gunlaws.com, where you can also find the books he recommends in this article.

Disney CEO Bob Iger: Those of Us in Positions to Influence Laws, Shape Culture...

The Best 243 Ammo for Target Shooting