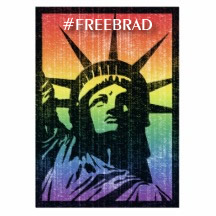 The outcry surrounding SF Pride's snubbing of Bradley Manning as an honorary Grand Marshal in the 2013 parade has the potential to unite every faction of the freedom movement from R3V0Lution to Occupy.


Concerns about the police state, indefinite detention, and NDAA together with a strong desire for universal, hard-core liberation (as opposed to vanilla "equality") ignited in outrage when the Pride committee announced its ill-fated decision, and now a bold coalition of freedom advocates has emerged with a beautiful vision for a parade of liberation that will dwarf the pride board's pitiful attempt to squelch any "hint" of support.


The Bradley Manning Liberty Torch Parade would begin in San Francisco, with the Bradley Manning contingent proudly igniting the flame of freedom and carrying it in the parade. But instead of stopping there, that torch will be carried, Olympian style, across the country, through freedom rallies in major cities along the way, just in time to be carried across the bridge into DC with Adam Kokesh on July 4th.


We believe this ceremonial procession has the symbolic power to catch the imagination of Americans from sea to shining sea ... galvanizing the widest spectrum of freedom activists seen in recent years, linking individual rights in a way that the left/right dichotomy has long held divided as opposition, and drawing the attention of alternative and mainstream media alike.