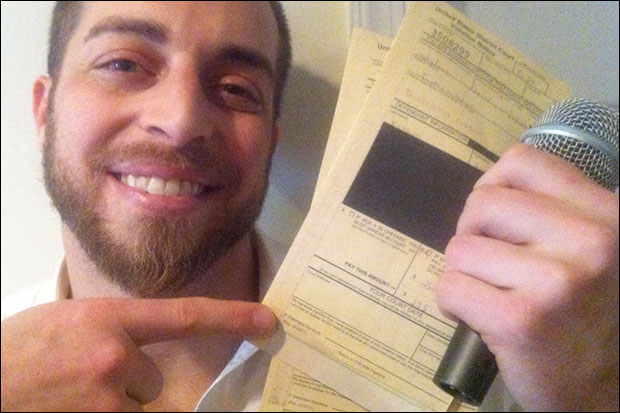 I just talked to Adam and he will tell us everything Monday morning on the 'Declare Your Independence with Ernest Hancock' radio show at 11am EST.
Adam is in good spirits and refused to cooperate in his own kidnapping at every stage.
Adam in driving back to his 'Secret Rebel Base' from Philly now (he refused to voluntarily provide his address... or anything else) and will start sharing his tale on Monday. You may wish to check out his webpage for early releases at http://adamvstheman.com/.
His Press Release regarding his arrest and his plans for the Fourth of July has the government/s wondering if they started something that they may not be ready for. But we all know that 'The Empire' will not give up power to the people this easily and have proven to be very creative and violent when their 'authority' is challenged.
"Now What?" should be the question in each of our minds.
If you have never experienced Adam's speech at the "Revolution March" in Washington on July 12th 2008, now's a great time. Then reading his press release would a greater impact on your understanding of the events surrounding Adam's activism.
"When injustice becomes law, resistance becomes duty" - Adam Kokesh - July 12th 2008

When a government has repeatedly and deliberately failed to follow its own laws, violated the fundamental human rights of its citizens, threatened the sanctity of a free press, created institutions intended to eliminate privacy of communication, waged war at the behest of special interest that threatens the public safety, killed hundreds of children with drone strikes, imprisoned and destroyed the lives of countless individuals for victimless crimes, stifled economic opportunity to maintain the dominance of the financial elite, stolen from the people through an absurd system of taxation and inflation, sold future generations into debt slavery, and abused it’s power to suppress political opposition, it is unfit to exist and it becomes the duty of the people to alter or abolish that government by whatever means necessary to secure liberty and ensure peace. A new American revolution is long overdue.

This revolution has been brewing in the hearts and minds of the people for many years, but this independence day, it shall take a new form as the American Revolutionary Army will march on each state capital to demand that the governors of these 50 states immediately initiate the process of an orderly dissolution of the federal government through secession and reclamation of federally held property. Should one whole year from this July 4th while the crimes of this government are allowed to continue, we may have passed the point at which non-violent revolution becomes impossible. The time to sit idly by has passed. To remain neutral is to be complicit, just doing your job is not an excuse, and the line in the sand has been drawn between the people, and the criminals in Washington, D.C. while some timid souls will say that it is too early, the we can solve this problem through democratic means provided by government, that current levels of taxation are reasonable for the services provided, and that the crimes of this government are merely a tolerable nuisance, it may already be too late. While there is risk in drastic action, the greater danger lies in allowing this government to continue unchallenged.

So if you are content with the status quo, stay home, get fat, watch the fireworks from a safe distance, and allow this Independence Day to pass like any other. But if you see as we see, and feel as we feel, we will see you on the front lines of freedom on July 4th 2013 for this: The Final American Revolution

4 Comments in Response to Adam Kokesh Released - No Conditions

Is the march on DC still on?

Agree or not with Adam's efforts, soon it will come down to those that talk/write/complain/vote/call/acquiesce etc. and those that simply will live free without worrying about some sort of sanction/approval/absolution.

Many of the most influential freedom advocates have been those that simply said "No" to central planning and controls. Living as though you know that you own yourself is best I'm sure, but those actions follow even understanding that concept... and then agreeing with it.

Soon the mere act of _not_ waving a flag as the goosesteppers parade by will be enough to be targeted for government attention (heck, this is what is happening to returning vets now).

Adam, and others, are getting noticed for standing up for their individual rights only because soooo many are living on their knees. And often as effective as challenging authority is to simply ignore it. Many millions have awoken to the ideas that support the intellectual arguments that we are morally in the right to ignore unjust laws and their enforcers. How you chose to do so is an individual decision.

There has to be some part of what is most admired about humanity that is lost when we seek to pull back those that act in defense of their own self-ownership. Like crabs pulling escaping crabs back into the collectivist bucket, we are bombarded by images and video clips in the Lame-Stream Media (the media that is sooooo last century) depicting scorn for those who seek a voluntarist lifestyle, even when the critics' lives could only be improved as well.

I personally have been thoroughly convinced for a very long time that there is no course alteration for 'The Empire' that would end in its continuation (other than an openly understood occupation) but there is great hope for each of our families and ourselves. Generations are starting to work together, petty differences are being set aside and common ground is sought rather than ignored. Those who do not embrace their community's existing efforts to provide more freedoms as solutions to... EVERYTHING, will be socially and economically shunned by their neighbors,... just when the governments are no longer able to even claim a 'safety net' with any legitimacy.

When will we start to see a great unwinding of governments at every level?... when a significant minority is convinced that government's central planners can no longer justify its existence. When the threat of government's presence is far more feared than any of the evils government supporters claim would envelop us without our being 'governed', -then- we'll start to witness an explosion in an increased quality of lifestyle that will send us into another era of humanity's climb out of the swamps.

Next... the abandonment of the swamp on the Potomac, and all that is required is a simple realization that we should and for individuals to just start living that way. My encouragement is that it has already started in earnest and no one I respect is looking for a permission slip.

Rebellion is an individual decision or you just become another collective. How you spend your time, what you use as currency, what you eat, what you grow, what you teach, what you learn and what you build is ALL a political decision. Please chose wisely.

And the best choice?... advocating that others get to make their own choices so you can freely make yours in a voluntary society.

Let's start looking at this thing in the proper way.

Two points. One is that there is law that states that when a Government official or employee acts outside of the scope of his/her office, then that person is acting personally, and not as a Government person.

Governments call police-like action against what looks like Government people, rebellion. They lie, to secure their position.

Let's stop calling it "The Government" or "The System" and start putting a human face on it.

From spying on every private communication recorded from years back only to pull those communications up to use against us as our government employees see fit, to buying two billion hollow point bullets to be used on We the People, to building a total militarized police state from sea to shining sea to be used against the electorate.

IRS immunity is motivated so as to use them as a political weapon to terrorize political enemies at the whim of whatever administration is in charge at the time. This should be an illegal crime against We the People.

All I know is there is Not going to be a Civil War in the United States of America if this situation keeps up. We the People are heavily arming ourselves too.

What there is going to be in America is a Civil Insurrection War on Government Employees we employ at every level of government, Federal, State, and Local. We the People will get the situation under control when our Government Employees get the proper attitude adjustment and realize who their real employer is and who they're supposed to be working for, not against.

You're either with the General Public We The People or you're with the Rogue Government Employees committing terrorist acts of violence on We The People.

How much more evidence do you need? This is what happens when you militarize a police state against We The People. This is just what happened to us this past week. There are thousands of more examples like this on Youtube.

Police Beat a Father To Death While He Begs For Help - Then Arrest Witnesses and Confiscate Video
http://www.youtube.com/embed/7taxYcpEfX4?feature=player_detailpage" frameborder="0" allowfullscreen>