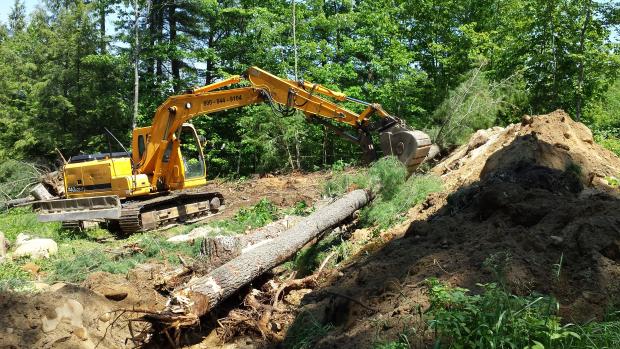 Maximizing the output of your land to provide food for you and your family is an important step towards survival. Plus, you get the satisfaction of being able to eat food that you grew yourself, knowing exactly where it came from. By using the techniques of permaculture, you can maximize the yield of any plot of land. The hugelcultur was popularized (and possibly named) by a permaculture genius named Sepp Holtzer. Sepp has created a paradise in Austria on a piece of land that had been mis-managed by the Austrian forest service. He invented many innovative techniques to turn a lousy site into what is arguably the world's best example of sustainable, high-yield agriculture.

A hugelcultur bed is simply a raised bed of soil that conceals woody matter. It can be pretty much any size, from a small mound in your garden to industrial-size piles of logs created by using heavy equipment. I recently built a pair of beds using the latter technique, but the important thing is the wood contained under the soil. That's where all the magic happens.

How does this magic work? There are several different things going on in a hugelcultur bed that make it superior to just planting on flat ground.

First, wood acts as a sponge, retaining moisture. If you live in an area where there is not much rainfall, you want to hold on to the water as long as you can. The wood helps achieve this goal. If you live in an area with a lot of rain, gravity has already been working to get that water downhill and probably not where you want it. Again, wood helps slow down this runoff and lets you hold on to it so you can get the maximum benefit.

Second, wood attracts mycelium. If you haven't heard of mycelium, you should do some research to find out about this amazing life form. Mycelium is the hardest-working organism in any successful forest. Its tiny tendrils feed on the wood and can actually move nutrients from where they are created to where they are needed. At some point, the mycelium sends flowers up to the surface in an effort to spread its seed. You probably know those flowers as mushrooms.

Third, as the wood decays, it releases nitrogen into the soil, which can be used by whatever you plant on top of the bed. Almost all plants love nitrogen.

Also, wood releases heat as it decays. Here in New Hampshire, the winters can get pretty cold and the summer growing season is shorter than in more southerly areas. Having a heat source underground can extend the growing season for a month on either side of the normal growing season.

Those are the main benefits, but there are more. For one, there are plenty of spaces between the logs, even after it is covered with dirt or soil. This give rodents a place to nest. By allowing this activity, you can use them as workers that keep air in the root system and keep it from being too compacted.

There's also the matter of creating a large berm at the edge of the property for privacy. A large berm provides privacy and, once planted, can give even provide more of a hedge.

Finally, there's another important reason I like the beds. I have a north-facing slope. During the middle of winter, the sun is so low in the sky that the entire hill is in the shade. By creating these beds across the slope, I can create tiny little south-facing hills that will see sunlight all winter.

So how are these made? There's really no secret: stack up some wood and cover it with dirt. Plant and wait for the magic. But there are some tings that will speed the process

First, you'll want to give the mycelium a head start. After you build the wood but before you cover it with dirt, go on a mushroom hunt. Put the mushrooms in a blender with a bit of water and toss that over the wood. The spores will find the wood right away and start to eat.

If you have access to high-nitrogen sources, like manure or plant clippings, put those on next. This will start the decaying process faster.

Finally, cover it over. I like to plant high-nitrogen cover crops the first year. Hairy vetch is a good start. It is a perennial that will give you two crops a year. As it dies out, the nitrogen in the roots will be released in the soil, providing a basis for the crops you want to plant. It helps if you inoculate the vetch seeds with rhizobia bacteria before you plant. The rhizobia will cause the roots of the vetch to develop nodes that are rich with nitrogen, increasing your yield.

I just finished a large-scale pair of beds. I wanted to go big for a couple reasons. First, I needed a berm to provide some privacy. Next, I cleared out an acre of pine trees and needed someplace to put them. I hired an excavator to dig two trenches, about five feet deep and a hundred feet long each. They formed a "V" shape to provide shelter from the wind and the structure faces west to trap the maximum amount of sun.

Where the two beds meet, we dug two deep "debris holes" to contain the root balls from the felled trees. The root balls could be put in the beds, but their size and shape makes it more difficult to work with. Plus, digging the deep holes gave us enough fill to cover the beds completely.

But don't let my industrial scale hugelcultur beds intimidate you. You don't need an excavator to get started. As I said before, the important thing is that you are burying wood. Pretty much any size bed will work on the same principles; the most important thing is to get the wood in the ground and covered.

I believe that permaculture is the key to self-sufficiency and can feed the world. Hugelcultur is just one of the tools you can use to start your journey. There are plenty of resources online to help you get started.

If you are new to permaculture, you should check out permies.com. Paul Wheaton has built an empire containing a vast amount of information, and a forum that is incredibly useful and devoid of trolls. It's a wonderful resource. Paul also has a podcast. His homey style and world-class guests make it a great place to start your learning process.

So get out there today and try your own. Grab whatever sticks you can find, line them up, and cover them with whatever soil you have. Instant hugelcultur bed. I assure you that you'll be impressed with the results!