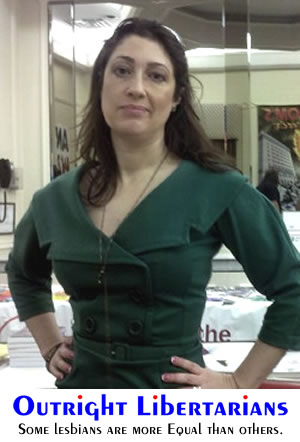 The truth is finally out. Outright Libertarians' Executive Chairmistress and self-proclaimed "Anarchist Bitch" has admitted in an exclusive instant message that her media empire has never been anything but an elaborate ploy for uterine dominance.

On the heels of a startling revelation at RawStory.com, Keaton freely admitted her plans to entrap Glenn Greenwald and David Miranda into fatherhood against their will.

"With these lesbians ruling the country, he warned, 'Men will be forced to labor for the economic benefit of marriages between women – marriages men have been ‘redlined’ out of – by the choice of two women who married with intention to have children by men outside the marriage. This approaches the definition of slavery – and perhaps sexual trafficking or bondage.'"

Concerned that his career as Secretary of Outright may have been only a ruse, Mikester inquired further: "Oh my god!! Are you trying to trap me into fatherhood!!? I trusted you!!"

Her startling reply? "Really, Mike. My uterus is Greenwald/Miranda territory only."

If any woman on earth is ruthless enough and capable of conceiving a child by two gay fathers simultaneously by sheer force of will, it is she. Her legendary powers of persuasion are known to have long-distance impact, and the long arm of her uterus could easily reach to Brazil.

Unavailable for comment was J Buzz Webb, who purportedly had voluntarily restrained herself in the "reverse fetal" position and opened her rectum with forceps, prepared to act as a surrogate incubator should the two desired fathers summon the courage to resist.

But Angela, in a statement released in advance, stated "I am a grumpy menopausal objectivist dyke [...] Repressing my misanthropy might have helped me raise money but it ruined my comedy." In her typical cantankerous fashion, this oblique expression of man-hatred can only be taken as confirmation of her intent to coerce unwilling fathers. This is characteristic of Class 1 lesbians, who according to the article are seeking "entrapped men [who] become economically-conscripted third parties [...] but get nothing in return."