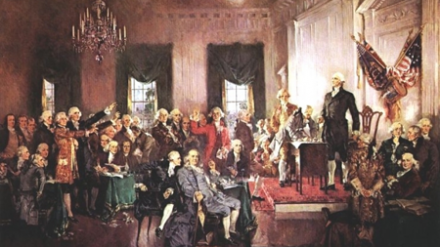 It is my pleasure, as Founder of the Organic Laws Institute, to present this short introduction to Constitutional Law as viewed
through the prism of the other three Organic Laws of the United States of America, the Declaration of Independence of July 4, 1776, the Articles of Confederation of November 15, 1777 and the Northwest Ordinance of July 13, 1787.  This introduction has been especially written for the student new to the concept of the strict separation of written law from unwritten law for a more accurate study of law and government.

I can begin this introduction, appropriately, with the devious Preamble to the Constitution of September 17, 1787, the unofficial beginning of the last of the four Organic Laws, because I started my basic research into the much easier to understand transition of the federal courts in territories as those territories were admitted into the Confederacy, the United States of America, under the authority of the Articles of Confederation.  That research established that none of the federal courts have been ordained and established as judicial courts-they were merely legislated into existence. That research was easy compared to unraveling the Preamble:

We the People of the United States, in Order to form a more perfect Union, establish Justice, insure domestic Tranquility, provide for the common defence, promote the general Welfare, and secure the Blessings of Liberty to ourselves and our Posterity, do ordain and establish this Constitution for the United States of America.

The court research was easily confirmed by the way the Constitution of September 17, 1787 treated the alleged highest officer of the alleged highest federal court-the Chief Justice. The only duty imposed on the Article I, Section 3, Clause 6 Chief Justice is stated as follows: "When the President of the United States is tried, the Chief Justice shall preside."  Clause 7 of Section 3 of the first Article then makes it clear that Impeachment is a non-judicial proceeding resulting only in removal from office. It was now apparent to me that the Constitution was not what everyone believes it to be. Almost every natural born American believes he or she to be a Citizen of the United States and a member of the posterity of "We the People of the United States," and that conclusion is exactly the misconception Gouverneur Morris was after when he wrote the Preamble. Gouverneur Morris is widely credited with writing other parts of the Constitution of September 17, 1787; he is one of only five men to sign both the Articles of Confederation and the Constitution. Gouverneur Morris knew both documents so well he managed to write one sentence that has fooled billions.

Article IV of the Articles of Confederation secures to the free inhabitants of the several States of the United States of America the right to live free of government without any loss of the privileges and immunities of State citizenship:

The better to secure and perpetuate mutual friendship and intercourse among the people of the different states in this union, the free inhabitants of each of these states, paupers, vagabonds and fugitives from Justice excepted, shall be entitled to all privileges and immunities of free citizens in the several states; and the people of each state shall have free ingress and regress to and from any other state, and shall enjoy therein all the privileges of trade and commerce, subject to the same duties, impositions and restrictions as the inhabitants thereof respectively, provided that such restriction shall not extend so far as to prevent the removal of property imported into any state, to any other state of which the Owner is an inhabitant; provided also that no imposition, duties or restriction shall be laid by any state, on the property of the united states, or either of them.

When a free inhabitant becomes a Citizen of one of the two Unions that free inhabitant suffers a net loss in freedom, which is worse if the non-perpetual Union is picked.  The original stated purpose and intent of the Constitution of September 17, 1787 was to make revisions to the Articles of Confederation of November 15, 1777, which would make the administration of the Northwest Territory more efficient.  This was, of course, a subterfuge to hide a government power grab led by George Washington and supported by both the States and the federal government. Both the federal and State governments were becoming painfully aware that unless uprisings such as Shays Rebellion were ended permanently and soon every State and local government would be in danger of collapse.  In the end the Articles of Confederation were revised by the misrepresentation that the Constitution created a "more perfect Union" that Union was first created as a not so perfect temporary one by the Northwest Ordinance of July 13, 1787.

Now, practically every American believes himself or herself to be among "We the People of the United States," the "more perfect Union," without realizing that by being one of the "People of the United States" much freedom is lost.  Because of the complexity written law, hardly anyone knows the Articles of Confederation have not been replaced or repealed.  The perpetual Union of States of the United States of America bound to Article IV of the Articles of Confederation is dormant not dead.  My Organic Law Institute can help you awaken the sleeping giant, the United States of America. President George W. Bush was briefed "the Constitution is just a piece of paper."  The Organic Law Institute will provide you with the legal education, so you can prove that and much more.