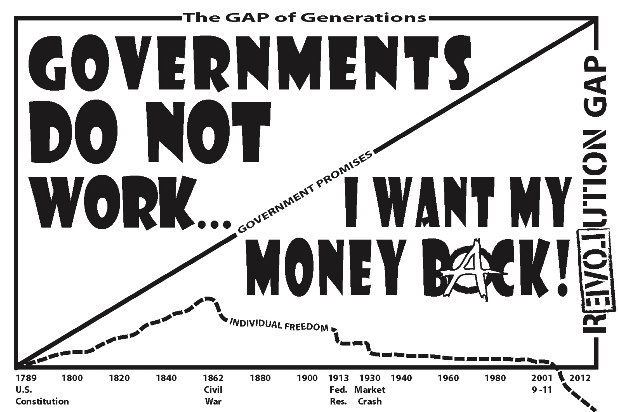 The reason there are seven billion statists on this planet is not because those people used evidence and reason to choose slavery over freedom; it's because the mental cage of authoritarianism is all they'e ever known, and all they've ever heard of. So they perpetually play the pointless game of bickering over what flavor of ruling class there should be, and never get anywhere near understanding or achieving real freedom.

For centuries there have been "radicals" advocating actual freedom (and I don't mean the "slavery lite" known as "minarchism"), and yet most people are still completely oblivious to those ideas. This isn't because the advocates of true freedom have been lacking in sound arguments, or lacking in good intentions, or lacking in passion. If anything, it is because advocates of freedom have been lacking in an understanding of human psychology and propaganda. The message was sound; the delivery mechanism was lacking.

A minority of the population actually enjoys thinking, philosophizing, pondering ideas and concepts, logically debating viewpoints, and so on. But most people just want to live their lives, be comfortable, avoid trouble, and don't want to have to think or care about whatever is wrong with the world. And when truth-seekers try to wake up crowd-followers, the truth-seekers often feel as though they're talking to a brick wall--all of their passion, reason and enthusiasm, just seems to scare away the "normal" people, more often than it makes them think about anything. So the truth-seekers get frustrated and discouraged, and the crowd-followers get annoyed.

One major obstacle is that it takes too much effort to actually understand things, so crowd-followers usual prefer to just believe things instead. Instead of logically and objectively analyzing different things they hear, usually they just base their beliefs on how the messengers look and sound. If a politician or pundit sounds sincere, looks attractive, and comes across as confident, polished, well-dressed, educated and informed, then it hardly matters at all whether his message has any truth or reason to it. In contrast, even the most brilliantly explained ideas will be ignored by most people, if they are delivered by a messenger who does not look attractive, professional, respectable, and so on. Everywhere you look, statism is being preached by rock stars, movie stars, all manner of celebrities and people in power, and other attractive, seemingly important, respectable people. On the other hand, freedom is often preached by dorky middle-aged white guys ranting for hours on end at cheap webcams in their basements (like me). Guess which one the crowd-followers usually side with.

I have long believed--and I've heard lots of other people say--that the message of self-ownership, the non-aggression principle, a stateless society, and so on, is a great message, but we need a better messenger to deliver it to the rest of the world. Well, for the past couple of months, I've been working with someone who I believe can be that messenger, and has the potential to reach millions more people than I ever could on my own, and more than almost anyone else I know could reach. 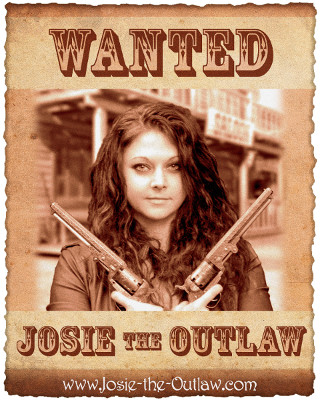 Her name is Josie, and for the project we've been working on--and even in her daily life--she proudly wears the label of "Outlaw." (The use of that term is actually a lot more significant than just a nickname, but I'll explain that elsewhere.) Now, the goal here is not to have one more person preaching to the choir, but to make something that truth-seekers can throw at the rest of the world, to try to get more of the "non-choir" folk to start thinking about things. You can find the new web site, and the four new videos already posted there, at www.JOSIEtheOUTLAW.com. I think the appearance and presentation of the videos is a lot better than anything I've done before, and not just because it's Josie delivering the message instead of me (though that obviously helps … a lot).

Some people around the Philadelphia area will already know Josie from local activist groups and events, but I'm thrilled that I happened to meet her before she got very well-known (which I think was destined to happen) and even more thrilled that she agreed to do this project with me. And Josie is not just a pretty face. Far from it. I have been hugely impressed by how perceptive and intelligent she is, and how quickly she got to the point of really understanding true freedom, not the "slavery lite" that I often bash. (I'm only slightly embarrassed that she went through the process so much faster than I did.) More importantly, achieving freedom and justice--for everyone, everywhere--isn't just a fun part-time hobby for her; it's what her life is about. And Josie is not the type of person who is after fame and attention for herself. In fact, she doesn't like being in the spot light, but is willing to take on that role if it helps combat tyranny, which I very much think it will. Unlike some in the "movement," she knows the difference between message and messenger, and knows which one really matters.

But the best message in the world is worthless, if it's not being seen or heard by anyone. The purpose of making these videos is to get the ideas of voluntarism and self-ownership to the seven billion people out there who have never heard of it. But for that to happen, we need you forwarding the videos around to everyone you know, friend or foe, freedom activist or devout statist. So watch the videos, and then see if you can think of any reason why you shouldn't spread them around, far and wide. Click on the thumbnails to view the new videos: 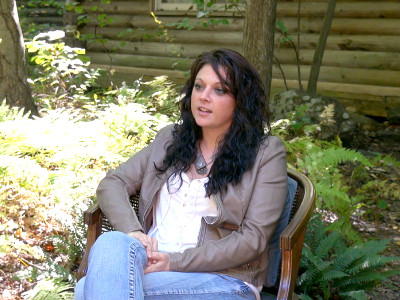 "On Being An Outlaw"

"Why Good People Should Be Armed"
Finally, if after watching the videos, you see the potential that I see, then Josie and I would love it if you could help us keep making them. We already have several more videos planned, and I doubt we'll run out of new ideas any time soon (if ever) but we can't keep doing it without the help of others. If you know of any more cost-effective way to spread the ideas of self-ownership, voluntarism, etc., to the rest of the world, then go support that instead. But nothing I've ever done before has anywhere near the potential to spread the message of true freedom as far as this could. Both Josie and I would love nothing more than to be able to focus our time and energy on creating and pushing this message--in fact, we both think that it's the most important thing in the world right now. If you think so too, any help you could give would be greatly appreciated.
The bottom of the new website
www.JOSIEtheOUTLAW.com
shows how you can support this project.
PayPal donations can also be made directly to ""josie@josietheoutlaw.com"
and Bitcoin donations can be sent directly to 14XjgAJD2zBPNF6cgBPvPfd4MoxRg4bZfD

Enjoy the videos, and if you deem them worthy, spread them far and wide!