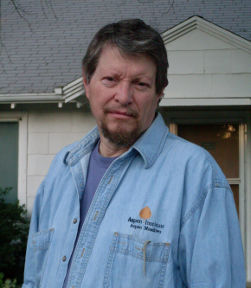 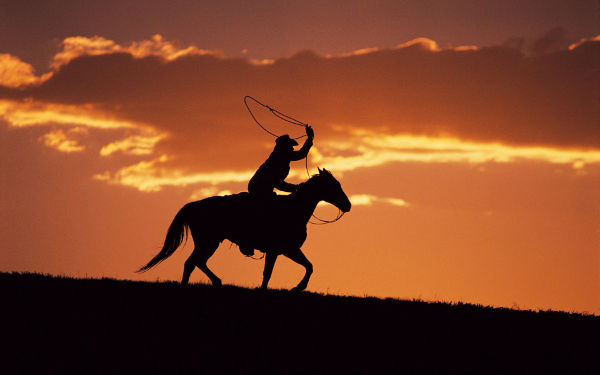 It's a movie cliche as old as the hills. The very first western film adventure, made by Thomas Edison in his rotating New Jersey studio, was about a train robbery. The second almost certainly told the story I'm about to describe and which we've all seen a hundred times.

In some happy valley somewhere in the west, cattle ranchers live and work contentedly on their own spreads, respecting their neighbors, helping and being helped, having occasional squaredances, until some rich guy from back east moves in and starts buying ranchers out. He knows that the railroad is about to come through, or gold is about to be discovered, making all the land much more valuable than it has been.

When they won't sell, he threatens them and intimidates their hired hands. When that doesn't work, a gang of masked marauders drives off their cattle, poisons their water, burns their buildings, and generally commits other mischief until, one by one, they begin to give in.

Finally, a single rancher remains. Often it's a pretty widow or the beautiful daughter of a murdered pioneer protecting what her family built. She is under tremendous pressure from the would-be land baron and his hot-headed, violent son who incompetently tries to kidnap or rape her or shoots a harmless old man or something equally heinous.

That's when a man steps in, Audie Murphy, John Payne, or Randolph Scott, a reluctant hero, a veteran of the War Between The States or a professional gunfighter, tired of killing, trying to forget his past. His decency (or interest in the girl) overcomes his reluctance. He saves the day, disposes of the evil land-grabber and his son, and either sets up housekeeping with the heroine or rides off into the sunset.

Sometimes cliches become cliches because there is truth in stories they claim tell. The famous saga of Billy the Kid and Pat Garrett was played out against the backdrop of New Mexico's Lincoln County War, a dispute over land claims between wealthy, political interests and small ranchers, many of them Mexican, to whom Billy was seen as a liberator.

Tom Horn became famous largely because of his involvement in Wyoming's Johnson County War, in which it is believed he was a "hit man" for the local Cattlemen's Association. Legend has it that, after he was sentenced to hang (using some odd semi-automated contraption), his sponsors slipped him a gun in the jail, but he failed to escape because it was an early Luger and he didn't know how to operate the safety.

He spent his last days in cell, braiding rope out of horsehair; I've often wondered if they used that to hang him with, or ordinary hemp.

In fact or fiction, land wars are nothing new to the American West. We have just seen the lastest chapter played out. This time, the evil land-grabbing millionaire is played by the corrupt and detestable United States Senator Harry Reid. His hot-headed idiot son is played by Rory Reid. The railroad about to be built through the peaceful valley, the gold about to be discovered, is a Communist Chinese government establishment—either a solar power farm or a factory to manufacture solar panels; the story seems to change each time it's told—worth billions to the Reids, built on land stolen from honest ranchers and sold to the Chicoms for less than a quarter of its real value.

The remaining hold-out, the honest, hardworking rancher who will not be displaced or driven away, is a fellow named Cliven Bundy, whose family have run cattle on the land for about a century—certainly longer than the federal Bureau of Land Management, the bureaucracy pushing the Bundys around as a personal favor to the evil senator Reid and his vile spawn has existed. So just like in the movies, Reid has sent in his masked raiders: hired murderers for the BLM, including snipers, unthinking creatures trained to kill in the most dishonorable way possible, in camouflage, from hiding, with scoped, high-powered rifles.

That they happen to resemble Imperial Stormtroopers more than traditional western villains is merely an accident of history. They are criminals, one and all, obeying illegal orders, and sooner or later they must face judgement exactly like the defeated Nazis faced at Nuremberg. Being primarily a novelist, and interested in character, I find myself wondering what their mothers and fathers are thinking, and what their children, raised in shame, will think of them in the future.

At this moment, the only thing standing between the Bundys and the unspeakable brutality (which we saw displayed at Mount Carmel near Waco in 1993) of a federal government that has totally abandoned its obligation to maintain Western Civilization, is the Second Amendment, and the happy willingness of their friends and newfound allies—the Oath Keepers and Mike Vanderboegh's Three Percenters—to exercize it.

Naturally, the putrescent Senator Reid has proclaimed these heroes to be "domestic terrorists", but Reid himself, his dickweed, and the thugs backing their play, are state terrorists who must be taken into custody, tried, and imprisoned for life for their crimes against the Constitution.

Nothing less is justice.