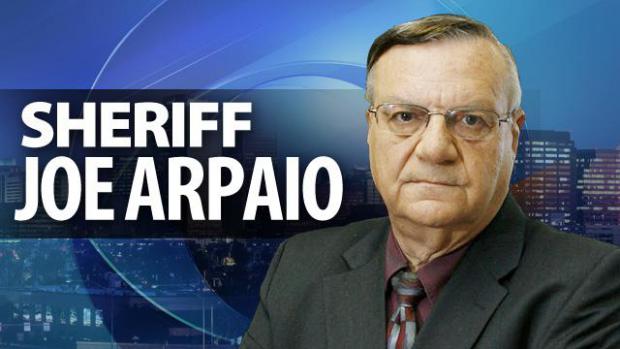 Friend, as one of my most loyal supporters and friends over the years, I wanted you to hear it from me first.

After much thought, prayers and talks with my loving wife, Ava, I have decided to run for re-election for Sheriff.

But, Friend, I can only run if I have your backing.

Will you please sign this pledge right now to signal I have your support?

This campaign is not going to be easy. In fact it will probably be the toughest campaign I have ever run. My opponents (of which you and I know there are many) would love nothing more than to see me defeated. As "America's Toughest Sheriff," I've been pushing back against radical leftist, law enforcement-bashing demagogues for years and now is their opportunity to take me down.

That's why I'm asking you to put down what you are doing right now -- click here - and let me know if I still have your support by signing your personalized "I STAND WITH JOE" re-election support pledge immediately.

I also need your financial support. Fighting the recall battle last year severely drained my campaign account. I hope after you sign your name, you will make a secure online contribution to my campaign.

I know I have counted on you many times before, and it is because of your loyal support that I have been able to win campaigns in the past and look to this next campaign with victory in our sights as well.

Simply put - I cannot win this election unless I have your support.

Sign the pledge for your support of my re-election campaign below today.

As you are aware, going up against Barack Obama's political machine, Hollywood leftists and their millions as well as a hostile local and national media is extremely expensive, which is why I need your financial support.

<<<< The Obama Justice department has been rolling out lawsuit after lawsuit to take me down.

<<<< The Democrats and left-wing fringe groups drained my campaign resources with a costly re-call election smear campaign that came dangerously close to defeating me, but with your support we prevailed.

<<<< Rampant, UNFOUNDED charges of racism and racial profiling in my office.

<<<< Al Sharpton, George Lopez, Linda Ronstadt and a gaggle of other celebrity lefties are using their Hollywood megaphone to slander my name and reputation.

<<<< A hostile national and local press corps that actually gets the weather right more than anything they report about me.

<<<< This time, the radical left is especially angry with me because I'm suing President Obama over his reckless amnesty proposals.

Friend, we've seen what they will do to take me down, and I have no doubt that this is going to be the toughest re-election battle of my career. And it's why I need to ensure I have your continued support.

As I take this next step towards running for re-election, I hope to have you by my side.

P.S. I have dedicated my entire life to serving our country. From the U.S. Army to a police officer to working as a DEA officer around the world to Sheriff, I've put my life on the line to ensure our laws our enforced. The respect for the Rule of Law is greatly being diminished in this country and I will stand by and let that continue. Please join me today!

This message was intended for: publisher@freedomsphoenix.com
You were added to the system September 10, 2014.
For more information click here. Update your preferences
Unsubscribe | Unsubscribe via email

1 Comments in Response to "I have decided to run for re-election for Sheriff."

Doesn't this criminal pursue the criminal, illegitimate, immoral, and UNCONSTITUTIONAL war on drugs? How in Gods name can you support a sheriff that pisses on the Constitution, the rule of law, and the inalienable rights of citizens? Is this an Onion parody Ernest of you supporting this hypocrite?