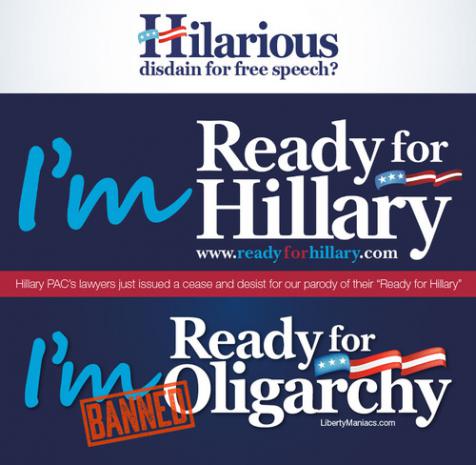 I'm In A First Amendment Legal Battle Over My Parodies. Again.

The whole thing started as a play off of the recent study by Martin Gilens and Benjamin Page that outlined how America's political system has become an oligarchy.  (Here's a segment where Jon Stewart talks with the authors.) Most of us had assumed this was largely the case, figuring that well-funded powerful elites largely ran the show in America, while the rest of us watched on the sidelines of power without any real influence. What made their study pretty remarkable was they actually proved it after 10 years of research.

So seeing these "Ready for Hillary" bumper stickers start to pop up everywhere drove me up the wall.  Really America? Hillary Clinton? We're going to go there?

But when the media began to pump the story of Jeb Bush possibly running for president in 2016, making the possibility of a Clinton v Bush II election, enough was enough. So I hatched the silly idea of doing a parody of the ubiquitous "I'm Ready for Hillary" design.  To be honest, I really just wanted to put it on my own car as a sticker, so I first made bumper stickers of the design, which basically just swaps out "Hillary" for the word "oligarchy."  Then I put them on shirts and mugs and things in the store for others if they liked them. Last presidential election I did parody yard signs that poked fun of  American politics being run by an oligarchy, and they were a hit.  I actually put a huge one in my yard as well.  It was hilarious to watch people stop and read it, even taking pictures next to it from time to time. The number one question people asked at the time about these signs, though, was "what the hell is an oligarchy?"

That's one reason I was so pleased to see that the Gilens and Page study made such a splash in the media this Spring. "Maybe people will actually get these stupid parodies now!" Well, evidently people got them this time - but not exactly the people I had in mind.

Within days of my posting the "I'm Ready for Oligarchy" bits, I was notified by the content review people at Zazzle.com and Cafepress.com that they had been contacted by lawyers from Ready for Hillary PAC, and that they weren't willing to produce my parodies - even in my own shops.

Disappointed, I turned once again to my lawyer, Paul Alan Levy, who not only represented me recently in the case against the NSA and DHS, but actually had in the past successfully represented Cafepress.com in a case where the Republican National Committee attempted a very similar tactics to take down parodies of the Republican elephant in 2008.

After a very short explanation of the circumstances - we'd sort of been there done that, after all - Paul took the case and gave his advice on what the best course of action should be.

What we decided to do was confront their willingness to challenge free speech in their candidate's name.  Levy sent a letter (PDF) today demanding a retraction of these takedowns within 3 days, or we will file an action for a declaratory judgment of non-infringement, seeking damages for lost sales and an award of attorneys fees for the issuance of a frivolous takedown.

I have no idea what the outcome will be right now, but it looks like the 1st chapter of this saga will unfold this week.  In 3 days, anyway. After spending the last year of our lives defending the right to make obvious political criticism in federal court against the NSA and DHS, I honestly didn't have the patience to wait around and get an answer from these people. Something is seriously wrong with our society if parodies like these can be challenged and people are so afraid that they just lay down when they get a frivolous takedown letter from some hack lawyers pushing down independent criticism from artists and humorists ahead of their foregone-conclusion-candidate's goes pre-announcement book tour.

I've worked with these companies for over a decade, even won a federal case to clear the way for exactly this situation against the two of the most powerful agencies in the federal government, and they still folded.

I'd like to thank all of those brave souls who have supported my work and my cases over the last year.  I absolutely could not have had the endurance, courage, and financial support to do the right thing without all of you. I'd also like to deeply thank Paul Levy and the staff at Public Citizen.   Mr. Levy is an absolute bulldog, and our country is a far better place because of him choosing to take on these cases and stand up for what's right by stemming the tide of idiotic copyright claims.

Last year I decided to draw a line in the sand and dig in. If people want to let free speech erode away in this country like they've decided to let many other rights and liberties disappear, that's their choice.  But I'm not willing to sit by and watch it happen.

So to Ready for Hillary PAC, or whomever else wants to get in line to challenge free speech with cowardly legal tricks I say this, bring it on. The joke will be on you.

" The number one question people asked at the time about these signs, though, was "what the hell is an oligarchy?" And why, exactly, do you want such ignorant fools to have a voice in governing a nation? Remember, these are twits, people with an attention span of 140 characters.