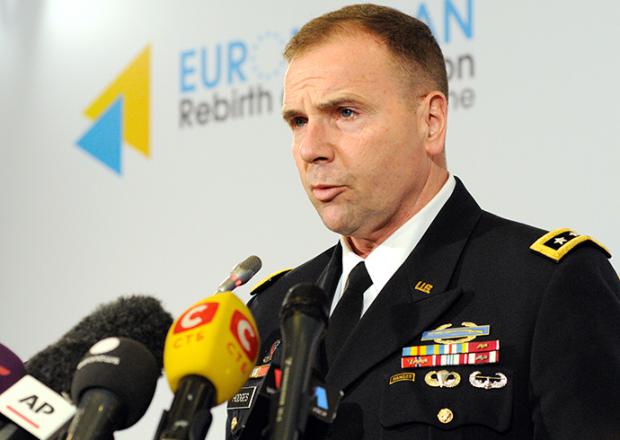 Gunslinger US General Readies for War with Russia

America is run by neocon lunatics and gunslinger generals. Together they threaten world peace.

Washington's only enemies are ones it invents to wage endless wars of aggression - premeditated ones against one country after another posing no threat to anyone.

Rogue states operate this way. Readers familiar with Orwell's 1984 understand. America exceeds the worst of what he envisioned.

World peace hangs by a thread. Humanity's survival is up for grabs.

"This is not an assumption," he blustered. "There is a Russian threat."

Fact: The whole world knows Russia threatens no other country - not America, other NATO members, other nations, none whatever.

Fact: No country goes more all-out for world peace and stability than Russia.

Fact: None more deserve high praise for their efforts.

Fact: America more than any other nation threatens world peace, stability and security.

Fact: It's reckless imperial agenda may kill us all.

Hodges outrageously accused an unnamed Russian official with threatening Denmark with a nuclear attack "if it participates in any missile defense program" -  intended entirely for offense against Russia.

He said deploying US combat forces in Eastern Europe close to Russian territory and parading them across international borders (an exercise called Dragoon Ride) sends a "reassuring (signal to) our allies."

In March, angry anti-war Czechs responded saying "Tanks? No thanks!" They want no part of US combat troops and heavy weapons on their territory.

They called it "an unnecessary and dangerously provocative military (stunt), which only increas(s) international tension."

World Without Wars and Without Violence member Tana Bednarova said "(t)he last time that vehicles like this came to the Czech Republic, they were Soviet tanks coming to crush moves towards democracy in 1968."

"We don't want such vehicles from foreign armies coming here ever again," she stressed.

She criticized NATO's eastern expansion saying if Washington and Alliance partners "want to create security in the world, then Russia and China and all other countries…should be invited to join."

Separately, Hodges said "(t)he whole purpose (of US Eastern European deployments) is to assure those allies that live closest to the Bear that we are here."

"President Putin exercises freedom of movement all the time. He moves troops and stuff around Russia whenever he wants to."

Fact: He does it nonthreateningly inside Russian territory.

According to Hodges, perhaps it's inevitable so America has "to be militarily ready."

"The best insurance we have against a showdown is that (US-dominated) NATO stands together."

"We're not interested in a fair fight with anyone," Hodges said. "I want to have overmatch in all systems."

It wants military superiority in readiness for an eventual showdown with Moscow.

In his last interview before death, noted German author Gunter Grass warned about  "sleepwalking towards another world war." He told the Spanish newspaper El Pais:

"We have on the one side Ukraine, whose situation is not improving; in Israel and Palestine things are getting worse; the disaster the Americans left in Iraq, the atrocities of Islamic state and the problem of Syria."

"There is war everywhere. We run the risk of committing the same mistakes as before. So without realizing it, we can get into a world war as if we were sleepwalking."

"All of this together makes me realize that things are finite - that we don't have an indefinite amount of time," Grass explained.

Maybe less than he imagined.