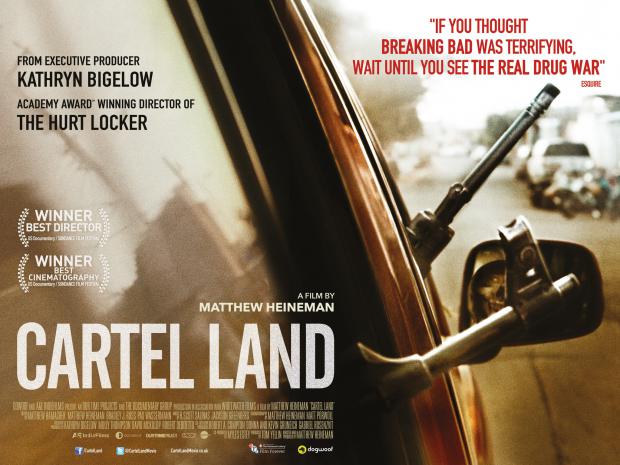 "Cartel Land" has received an Oscar nomination for best documentary feature. This interview with its director was published at the time of the film's release in July 2015.

Now viewers can watch it for real from the comfort of a movie theater seat.

"Cartel Land," a documentary opening in the United States and Mexico on Thursday, takes a painfully close look at the drug war south of the Rio Grande with a cinematic lens.

While beautifully filmed, it's a brutal watch, as you can see from this trailer.

Apart from the adrenalin-packed gunfights, it also has gut-wrenching human moments, like when one woman describes how she watched her husband being butchered in front of her.

The action follows two vigilantes — one Mexican, one American — who battle the cartels committing these atrocities on each side of the border.

Filmed in late 2013 and 2014, it depicts Mexico's vigilante movement at its height, when it was rooting out the head-chopping Knights Templar Cartel in Michoacan state.

In contrast, the American vigilante sees little action as he wanders around Arizona's desert, harassing migrants and talking about fears of the cartel war creeping over.

With Kathryn Bigelow as executive producer, of "Zero Dark Thirty" and "The Hurt Locker" fame, it's gained release in commercial theaters.

Director Matthew Heineman spoke with GlobalPost and other journalists in Mexico City about his labor of love. Here's why he thinks the movie matters.