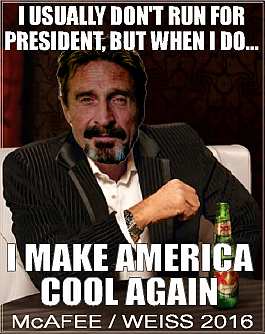 We have a voice, yet Americans are led to believe we must support this façade of lies and force we know as politics.
The political process doesn't move our world forward. We advance through technology and the pursuit of our vision for a better life.
Let us embrace our voice, let us exit.
#‎VoteDifferent

This video also announces our bold plans for the Libertarian Convention, including a Voice & Exit Festival Pre-Party the night before the Presidential Vote, FEATURING Govinda! In 2022 people will still be kicking themselves that they were not here for this.
Check out the Facebook Event for all the details: https://www.facebook.com/events/1199110010119946/

An Anti-Virus Pioneer and Privacy Advocate, John comes on the show to talk about his run for the Libertarian Candidate for President of the United States

John McAfee is a world-famous tech CEO, computer scientist, civil disobedience activist, privacy advocate, and pioneer of the commercial anti-virus industry, and Libertarian Candidate for President of the United States. In his 70 years, McAfee served as chief executive of a multi-billion dollar organization and launched over 30 businesses in the U.S. and abroad. McAfee believes that The Libertarian Party is America's only hope to restore sanity to our government.

I'm running for president of the United States as a candidate of the Libertarian Party.

The Libertarian Party stands for Freedom, Privacy and Personal Responsibility. Libertarians believe that government best serves by leaving us alone to live our lives as we see fit.

The Libertarian Party is America's only hope to restore sanity to our government.

Millions of Libertarians are working to take back our country from the two-party machine. I hope you will join us."

The Nevada Libertarian Party worked hard to put together a prominent forum for the three leading presidential hopefuls in a debate held yesterday in Las Vegas. The debate, featuring former Republican Gov. Gary Johnson, movement activist and Libertarian Republic founder Austin Petersen, and antivirus software legend John McAfee, was moderated by noted stage magician and libertarian Penn Jillette, known professionally as just "Penn." (The event, whose attendance I estimate at around 300, was also a fundraiser for Penn's favorite charity, Opportunity Village, which provides opportunities and aid for the intellectually disabled.)

McAfee, after patiently and effectively participating through the multi-hour four-part debate, chose in his closing remarks to attack the very concept of it. "You may think you learned something by watching this debate. I assure you you have learned nothing at all." He then attacked the polished soundbite culture and canned answers of debates and hinted at the complicated truths they obscured. (He also used language unfit for most TV twice in this closing statement.)

I disagree with McAfee that the average viewer would "learn nothing" from the debate.

LP debate adIt is scheduled to be aired later this week on Glenn Beck's The Blaze network—numerous times, Nevada's L.P. Chair Brett Pojunis, who wrangled the event, tells me. That audience in particular may learn of an interesting political universe they barely knew existed. One longtime L.P. national committee member told me he hopes via The Blaze that this debate can become a moment of historical signficance for the L.P. and even emulate the political ferment caused by Rick Santelli's famous summoning of a new "Tea Party" movement in 2009 on CNBC.

The debate's four parts allowed the candidates to answer questions from Penn while alone on stage in "town hall" style; from local and state party members and politicos in the crowd; from famous people from afar; and to issue quick lightning round responses to various policy issues.

McAfee flashed his libertarian hard core in the lightning round and won frequent audience applause with answers in the style of: Should we end the war on drugs? We should end the war on everything. Should birth control be available without a prescription? Everything should be available without a prescription. Would you have invaded Iraq? Why invade anyone?

In his "town hall" portion conversing with Penn, McAfee jumped right in discussing his latest media controversy—being called a liar by Gizmodo over claims his compatriots hacked WhatsApp's encryption. McAfee insists that publicity only helped the stock price of the company he was recently named CEO of, MGT Capital Investments, whose stock price has more than quintupled this week, with the rise continuing after the Gizmodo article.

This seemed part of his general strategy of making sure no one can say anything bad about him he hasn't already said himself. McAfee also called himself a "walking revolution" and for those who doubt sudden and extreme change can come from unexpected places, reminded us of a couple of fellows named Lenin and Gandhi.

Penn asked McAfee to explain the most likely troubling part of his career, his eventual flight from Belize in 2012 tailed by accusations of possible complicity in the murder of a neighbor there. McAfee reiterated his innocence in the death of Gregory Faull, and he said his Belizean troubles were really a story of a "man willing to stand up to corruption at the risk of his life," one that should be a plus on his resume, not a minus. He reiterated his epigram summing up his vision of libertarianism: "our bodies and minds belong to ourselves."

Austin Petersen in his "town hall" segment discussed his pride in his own campaign's progress from scrappy outsider to seeming contender. (We won't really know for certain what's going on with L.P. delegates until they vote over Memorial Day weekend.) Petersen thinks libertarianism is a core belief of most Americans once they understand it. He instructs Libertarians to stop feeling snobbishly superior to the average American if they aren't already on board the L.P. train.

While Libertarians cannot promise a utopia on earth or that government can solve all their grievances, as he thinks your Trumps and Sanders try to do, Petersen announced that Libertarians do understand that no one knows how to live your life better than you do. (When he opined that some on the youthful Social Democratic side might want to vote for him just because he's the youngest candidate, it seemed overly optimistic.)

Gary Johnson also seems to think Libertarian views already do represent a majority of Americans, though that can never be apparent unless the party gets into the presidential debates. He hyped his New Mexico gubernatorial record of vetoes and acknowledged that he "got his ass kicked" in 2012 when he was the L.P.'s candidate, but insists his people are "a team of winners" who just happened to be beat, and are ready to redeem themselves if given the chance.