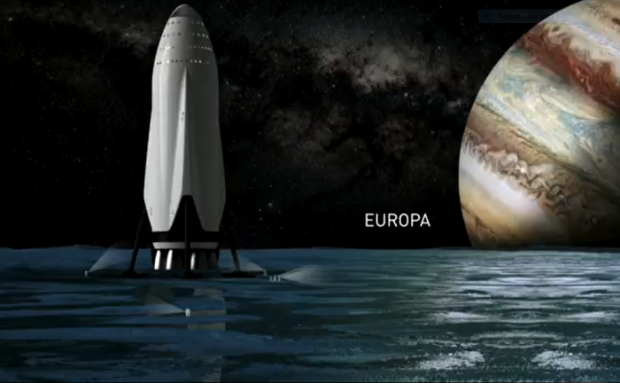 ... and the rest of the Solar System - Elon Musk Explains - VIDEOs

SpaceX Founder, CEO, and Lead Designer Elon Musk will discuss the long-term technical challenges that need to be solved to support the creation of a permanent, self-sustaining human presence on Mars. The technical presentation will focus on potential architectures for sustaining humans on the Red Planet that industry, government and the scientific community can collaborate on in the years ahead.

Elon Musk unveils radical 'megashuttle' that will take man to Mars in 80 days to set up a million person city - but warns first visitors 'must be prepared to die' Spoke at the International Astronautical Congress in Mexico today to reveal the plan Pledged to make the price of a trip to Mars the same price as a house - $200,000 Shuttle would launch with empty fuel tanks and refuel in orbit, and propellant would be made on Mars Will launch from Earth on a reusable booster and carry 100 passengers at a time Shuttle could eventually carry 200 people and reach Mars in just 80 days Hoped craft could first fly in just four years, with first Mars trip in a decade

SpaceX chief Elon Musk has unveiled his most ambitious project yet - an 'interplanetary transport system' to take man to Mars in 80 days and build a sustainable human colony of a million people there.

'What I want to achieve is make Mars seem possible, to show that we can do it in our lifetimes, and you could go,' he said at the International Astronautical Congress in Mexico.

However, he warned the trip was likely to be dangerous - and said candidates for the first missions 'must be prepared to die'.

Scroll down for video
The Interplanetary Transport System will use a giant shuttle capable of carrying 100 passenger to the Red Planet at a time, and Musk hopes to take a million people to set up a sustainable city there. It will launch from Earth on a giant version of SpaceX's reusable rocket booster, unfurling solar sails to power its journey to the red planet.

The Interplanetary Transport System will use a giant shuttle capable of carrying 100 passenger to the Red Planet at a time, and Musk hopes to take a million people to set up a sustainable city there. It will launch from Earth on a giant version of SpaceX's reusable rocket booster, unfurling solar sails to power its journey to the red planet.

The Interplanetary Transport System will use a giant rocket booster with a 12m diameter and 49 engines, and a special shuttle with a 17m diameter, making the entire rocket stack 122 m high.

They will launch with empty fuel tanks and refuel in orbit.

Once on Mars, they would make more methane fuel for the return journey.

'I think the first journeys to Mars will be really very dangerous,' said Musk.

'The risk of fatality will be high. There's just no way around it.'

'Are you prepared to die? If that's okay, then you're a candidate for going,' he added.

He also said he wouldn't be vying to be the first man on Mars.

'The risk of death would be quite high, and I'd like to watch my kids grow up.'

He admitted he would take the trip - one day.

'I'd definitely like to go to orbit, visit the space station and ultimately goes to Mars,' he said.

'I'd need to make sure if something goes wrong there's a succession plan in place - investors taking over the company would be my biggest fear.'

'This is less about who goes there first.

'The thing that really matters is making a self-sustaining civilization on Mars as fast as possible. This is different than Apollo.

'This is really about minimizing existential risk and having a tremendous sense of adventure,' he said.

Musk outlined plans for a fleet of large 'megashuttles' that would take 100 people at a time to Mars for $200,000 a trip, after warning 'eventually history suggest there will be some extinction event on Earth'.

'One path is we stay on earth forever and there will be some eventual extinction event. I don't have a doomsday prophesy,' he said.

The other is to become a spacefaring and mutiplanetary species, which I think some would say is the right way to go - that's what we want.'

He hopes to set up a self sustaining city on the red planet with a million people.

'It will not be an outpost, but will become a city in its own right.'

He explained that there were no real options other than Mars.

'We can grow plants on Mars by compressing the atmosphere.

'It would be fun there, as gravity is a third of what it is on Earth.'

1 Comments in Response to We're Going to Mars... FINALLY!

If one cannot refute or negate the conclusions made in these video then one cannot claim humans are have the capability to explore Moon or Mars globes. One has two choices after watching these videos – paradigm shift or cognitive dissonance. All individuals promoting ancient and future astronauts must deal with this issue by neutralizing the realities in these videos and so much more evidence.that has been ignored. https://www.youtube.com/watch?v=rSP_afWjKss https://duckduckgo.com/?q=Moon+Flat+Earth+Proof&t=h_&atb=v43-7&ia=videos&iai=0aNEuXmGW2Q https://www.youtube.com/watch?v=mGx1zs0k4qw

Meteorites May Have Brought Water to Earth and Mars

The US And China Lead The Space Race 2.0