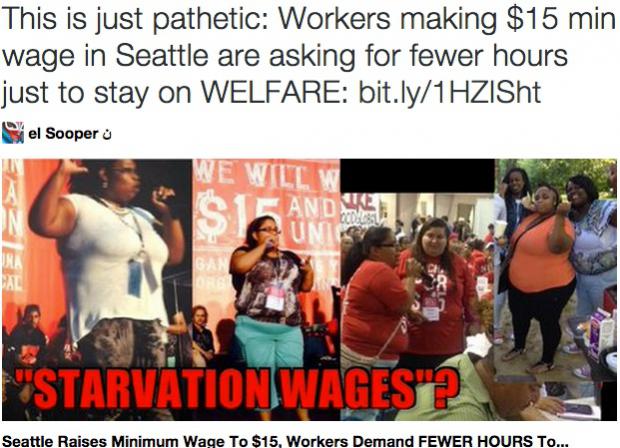 Seattle employees ask for REDUCED hours so that "jacked-up" minimum wage won't cost them subsidized housing:
Gee, who could have seen this coming...?

Now this is downright funny. They scream for a higher minimum wage, then, when they get it they complain because
they make too much money to qualify for the free stuff, go figure. By jacking up minimum wage, Seattle has provided
a valuable lesson in liberal economics. The plan has now backfired.

Nora Gibson, executive director of Full Life Care, told Seattle's KIRO 7 TV she saw a sudden reaction from workers
when Seattle's phased minimum-wage ordinance took effect in April, bringing minimum wage to $11 an hour. She said anecdotally, some people feared they would lose their subsidized housing so they have asked that their work hours be
reduced to remain eligible for all government subsidies.

It doesn't stop at $11/hour. The law puts it up to $15 starting January 1, 2017, they will have to reduce their work hours
even more to remain eligible for handouts.

Good thing the minimum wage wasn't raised even higher, most would not work at all, they prefer to be spoon fed and
remain on the government plantation.

So now workers work fewer hours, but for the same take home pay, business' labor costs increase so prices increase,
buyers (workers) pay more and no one is better off.

Remember free market capitalism? Under that system, the harder and smarter you worked, the higher your standard
of living. But that was found to result in income inequality, sonow we have a system where wealth is bestowed by
bureaucrats, and working harder doesn't always make sense.

Just a little bit at a time until America is gone!