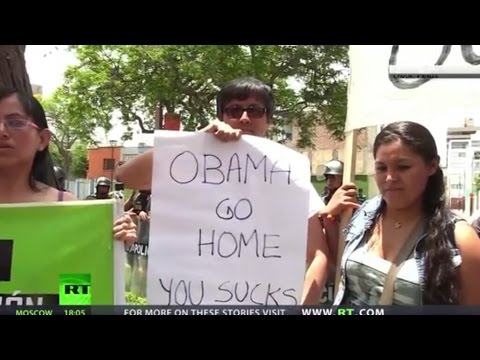 His last foreign trip is ending on a sour note. Peruvians are smarter than most Americans, largely uninformed and indifferent about vital issues affecting their lives and welfare.

In Lima, Peru for the APEC summit, hundreds of angry protesters greeted his arrival, demonstrating against him and TPP in the city's financial district. Clashes with police erupted.

He and other protesters denounced leading TPP advocate Obama, US post-9/11 militarism, and rapacious globalization, resulting in "growing inequality in wealth, income, and opportunity in many countries."

They've got Donald Trump's support, a vocal TPP opponent, calling it "a disaster," a jobs killer, "the consequence of a leadership class that worships globalism over Americanism…pushed by special interests who want to rape our country." Earlier, he proposed the following:

"Withdraw the US from the Trans-Pacific Partnership, a 12-nation deal that is a top priority for Mr. Obama but has not been ratified by Congress.

Direct the secretary of commerce to identify every violation of trade agreements by foreign countries and use every tool available to end the abuses.

Force a renegotiation of NAFTA or pull out of the agreement.

Designate China as a currency manipulator.

Bring trade violation cases against China in the US and with the World Trade Organization.

Use presidential powers to impose punitive tariffs on China if it does not end illegal trade practices, including the theft of American trade secrets."

Without US support, TPP is dead. Ratification by all 12 countries signing it is required. According to the Electronic Frontier Foundation, a staunch TPP opponent, Trump's election "marks the end of a long-running campaign against the secretive agreement that EFF began back in 2012.

It faced "long odds" in Congress no matter who succeeds Obama. Trump's triumph appears to assure its defeat - a major consumer, worker, environmental victory, a defeat for Wall Street and other corporate predators.

Led by Mexico and Japan, TPP signatories, minus America, are discussing a possible new agreement in Lima on Saturday and Sunday.

It's too early to know what may follow TPP's demise, especially given Trump's America First pledge.