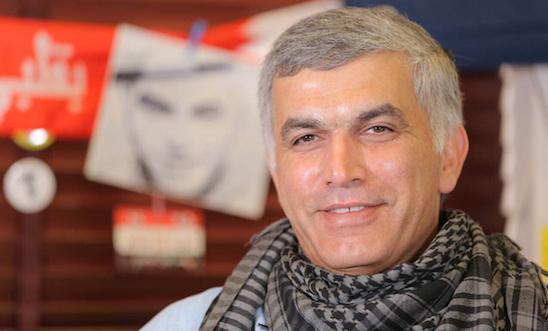 It's a regime run much like Saudi Arabia, both countries intolerant of any justifiable challenges to their police state rule.

A day after Bahrain's High Criminal Court ordered Rajab released on bail, postponing a hearing on trumped up charges against him until January 23, he was rearrested and detained on phony charges of "disseminating false documents and malicious rumors on the internal affairs of the Kingdom of Bahrain that could damage its status."

Arrested in June, he was held for seven months in pre-trial detention for tweets about torture in Jau prison and Saudi high crimes in Yemen.

While imprisoned, his health deteriorated, requiring hospitalization several times. A previous article discussed his September NYT op-ed, explaining his harsh treatment (mostly in solitary confinement) "all because of my work as a human rights defender," he said.

Around "4,000 political prisoners in Bahrain" languish in gulag hell, tortured and ill-treated "for daring to desire democracy," he explained.

Fellow redoubtable human rights defender Abdulhadi al-Khawaja was sentenced to life in prison in 2011 for daring to speak truth to power.

Following Rajab's Times op-ed, he was charged with publishing "false news and statements and malicious rumors that undermine the prestige of the kingdom."

In November, he wrote another op-ed for Le Monde. Charges of "spreading false information and tendentious rumors" followed for saying "(i)n September, when I wrote an open letter to the US administration, the Bahraini government brought new charges of damaging Bahrain's reputation against me."

"France and Germany, you need to reassess your relationship with these monarchies, which actively work against democracy and human rights and fan the flames of violence and extremism."

"My trial is not exceptional, it is ordinary. Thousands of Bahrainis are in prison for voicing criticism and demonstrating against the government, and thousands more have been murdered across the Arab world for daring to exercise their right to self-determination. That is truly appalling."

In December, 50 NGOs urged UN action on his behalf. The UN High Commissioner for Human Rights called for his release "immediately and unconditionally."

The State Department called for his release, but did nothing to pressure Bahraini authorities to comply. Nor did Britain despite Prime Minister Theresa May, saying the UK "raises the issue of human rights (with) Gulf states."

Neither she nor Foreign Secretary Boris Johnson discussed human rights when visiting the Middle East.

Throughout Rajab's ordeal, they did nothing to pressure Bahraini authorities to release him immediately and unconditionally. Nor did Obama.

America, Britain and other EU countries support the region's most despotic regimes, ignoring their outrageous practices.

Reason Is the Greatest Weapon in the Fight Against Tyranny

Why The Future Needs Us Humans

Criminalizing Speech and Press Freedoms in the US and UK

Iran Close to a Nuclear Breakout