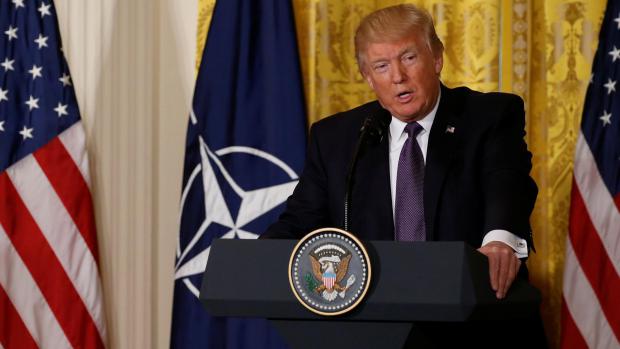 What a difference an election made. Candidate Trump railed against the North Atlantic Alliance, calling it "obsolete."

Last April, he said if elected he'd consider withdrawing America. "It's possible that we're going to have to let NATO go," he said, adding:

He said he'd "call up all of those countries . . . and say 'fellas you haven't paid for years, give us the money or get the hell out.' I'd say you've gotta pay us or get out. You're out, out, out . . . Maybe NATO will dissolve, and that's OK, not the worst thing in the world."

Once in office, Trump flip-flopped dramatically. Unlike Margaret Thatcher, the president is for turning. As commander-in-chief of America's military, he loves NATO. It showed during US-installed Secretary-General Jens Stoltenberg's Wednesday White House visit.

Trump called NATO "the bulwark of international peace and security." Since its involvement in America's 1990s Balkan wars, culminating with the 1999 rape of Yugoslavia, it's been the most destructive military alliance in history.

It destroyed one country after another - killing, injuring and displacing tens of millions, currently waging naked aggression in multiple theaters. America calls the shots. Other alliance members salute and obey.

Trump: "We are grateful for the support of NATO members and partners in their condemnation of Assad's murderous attack, using the most horrible weapons."

"The vicious slaughter of innocent civilians with chemical weapons, including the barbaric killing of small and helpless children and babies, must be forcefully rejected by any nation that values human life. It is time to end this brutal civil war, defeat terrorists, and allow refugees to return home."

Trump: "The Secretary General and I had a productive discussion about what more NATO can do in the fight against terrorism. I complained about that a long time ago and they made a change, and now they do fight terrorism."

Fact: America, NATO and their rogue partners support the scourge they claim to oppose.

Trump:  "We're here to protect the freedom and prosperity of our citizens and to give them the future they so richly deserve."

Fact: Under both right wings of US duopoly governance, Americans are ill-governed, ill-served and abused to protect the interests of the nation's privileged class - especially its bankers and warmakers.

Trump: America "reaffirm(s) (its) commitment to (NATO) and to the enduring values that we proudly…share."

'You don't get to have your cake and eat it too':

Trump to Become Speaker of the House - January '23