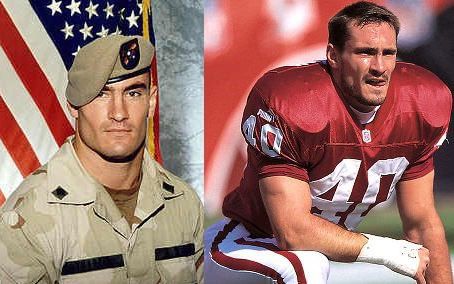 FROM A READER OF FREEDOM'S PHOENIX...

April 22 was the 13th anniversary of the friendly fire killing of Cpl Pat Tillman, a football hero and man of honor who gave up millions in potential earnings to serve his country. I watched the documentary movie "The Tillman Story" as I do every year on the anniversary of his death.
The movie uses actual footage from that time and interviews with key people involved. It documents Tillman's death and the beginning of a massive cover-up of the real reason for his death. The cover-up involved several senior military officers and, possibly, the President. The
reason I devote attention to this incident is because I believe we have lost moral high ground in our country and that senior members of the military, especially those who graduated from our service academies (where those highest standards of honor are incorporated into strict honor codes), should be expected to exemplify high standards of honor and be leaders for the rest of our nation.

Sadly, I am concerned that we are failing at this. There is currently no obvious reason to expect that, if an incident like the Tillman killing were to occur today, that our senior military leaders would not make the same decisions they made in the cover-up following Tillman's death. As
for service academy grads, the only rigorous studies that have been done suggest that our service academies are failing to enforce their honor codes. Survey research by Air Force Academy graduate Fred Malmstrom shows that the percentages of service academy graduates who admit to having committed honor violations while they were students has been steadily rising for over 30 years and now includes well over half the graduates.

We need to do something different...

Pat Tillman never thought of himself as a hero. His choice to leave a multimillion-dollar football contract and join the military wasn't done for any reason other than he felt it was the ... See full summary »