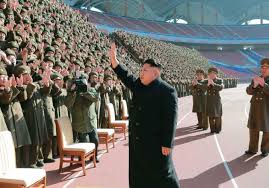 Contrast the two countries. North Korea never attacked another nation throughout its history. In June 1950, it responded to South Korea's aggression, Truman's war.

Israel wages permanent war on Palestine, terror-bombs Syria and Lebanon at its discretion.

Which country poses a greater threat to world peace, stability and security? Which one is more likely to attack another nation? Which leadership is more recklessly dangerous?

Both countries are nuclear armed and dangerous. They each maintain banned chemical, biological, radiological and other terror weapons.

Lieberman ignored it, accusing Pyongyang of "cross(ing) (a) red line with its recent nuclear tests." In response, the DPRK called Israel the "only illegal possessor of nukes in the Middle East under the patronage of the US."

It said Lieberman's comments reflected a "cynical ploy" to shift attention from responsible criticism of its illegal occupation, along with its crimes of war and against humanity.

North Korea "fully support(s) the struggle of the Palestinian people (in their determination to establish) an independent state with Quds (Jerusalem) as its capital."

It promised a "thousand-fold punishment to whoever dares hurt the dignity of its supreme leadership. Israel would be well-advised to think twice about the consequences (of) its smear campaign against the DPRK."

It called its "access to nuclear weapons…the legitimate exercise of its righteous right for self-defense to cope with the US provocative moves for aggression, and the DPRK's nuclear force is the treasured sword of justice firmly defending peace on the Korean peninsula and in the region."

Lieberman accused Kim of supporting Iran, Syria and Hezbollah. Israel and North Korea criticized each other before.

"And there's no (responsible) prime minister to call his prattling and belligerent ministers to order," he added.