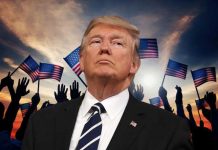 International Workers' Day is commemorated worldwide annually on May 1 - except in America, where worker rights long ago were abandoned, corporate profit-making alone supported.

Trump ignored what May Day signifies, proclaiming May 1 as Loyalty Day - insulting US workers, asking all Americans to pledge allegiance to what demands condemnation, saying:

"We pledge our dedication to the United States of America and honor its unique heritage, reminding ourselves that we are one Nation, under God, made possible by those who have sacrificed to defend our liberty."

Fact: America's "unique heritage" reflects doing more harm to more people over a longer duration than any other rogue regime in history.

Fact: Liberty in America is dying, tyranny replacing it, heading for becoming full-blown, one police state law and presidential directive at a time.

Trump's proclamation: "The United States stands as the world's leader in upholding the ideals of freedom, equality, and justice."

"Together, and with these fundamental concepts enshrined in our Constitution, our Nation perseveres in the face of those who would seek to harm it."

Fact: America is a rogue terror state, waging war on humanity at home and abroad, responsible for  raping and destroying one nation after another, perhaps intending catastrophic nuclear war dooming us all.

Trump's proclamation: "(W)e will always stand strong against the threats of terrorism and lawlessness. The loyalty of our citizenry sends a clear signal to our allies and enemies that the United States will never yield from our way of life."

"Through the Department of Defense and other national security agencies, we are working to destroy ISIS, and to secure for all Americans the liberty terrorists seek to extinguish."

Fact: America created and supports the scourge of terrorism - recruiting, arming, funding and directing its fighters as imperial foot soldiers.

Fact: Washington isn't "working to destroy ISIS" and other terrorist groups. It's using them to do its killing and dying in lieu of large numbers of US combat troops deployed to numerous war theaters.

Trump proclamation: On Loyalty Day, "May 1 of each year…we honor the United States of America and those who uphold its values, particularly those who have fought and continue to fight to defend the freedom it affords us."

Fact: American "values" demand condemnation, not support. Instead of defending fundamental freedoms, they're being systematically destroyed worldwide so privileged elites can become richer and more powerful than ever.

Separately, Trump also declared May 1 "Law Day," claiming it "reflect(s) upon our great heritage of liberty, justice and equality."

Donald Trump Built a National Debt So Big (Even Before the Pandemic)...

I am Just in the Way