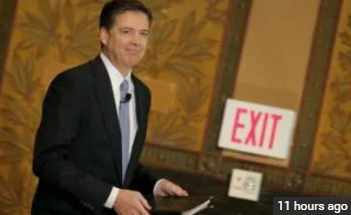 Virtually everything happening in Washington is politically motivated, not responsible actions by presidents, Congress and judicial authorities for the general welfare.

Throughout its sordid history, it activities included infiltrating, disrupting, sabotaging and destroying activist groups for ethnic justice; racial emancipation; economic, social, and political equality across gender and color lines; along with elements opposed to imperial wars.

Harmful to the general welfare agency activities continue no matter who's in charge or staffs high-level positions.

Comey's firing won't change a thing. The new director will be like previous ones. America's police state system needs changing - possible only by committed grass roots activism, never top down by politicians or bureaucrats.

A brief Spicer statement said Comey was "terminated and removed from office" on advice by the Justice Department's two top officials, adding "today will mark a new beginning for our crown jewel of law enforcement…A search for a new permanent FBI Director will begin immediately."

Trump's letter said he acted on recommendations from Sessions and Rosenstein, saying Comey's "not able to effectively lead the Bureau," termination effective immediately.

In a memo to Sessions, Rosenstein criticized Comey's "handling of the conclusion of the investigation of Secretary Clinton's emails," adding "I do not understand his refusal to accept the nearly universal judgment that he was mistaken."

"Almost everyone agrees that the Director made serious mistakes; it is one of the few issues that unites people of diverse perspectives."

"Mr. Comey did not seem to understand some of the laws he was asked to enforce and unfortunately politicized his sensitive position as the FBI director. President Trump took the right step in cleaning house at the FBI."

Comey angered hardline Republicans for not indicting Hillary. Democrats opposed his investigation and public pronouncements about her they believe influenced the election's outcome.

Trump was angry about his disputing the president's wiretapping claims. Whatever he did or didn't do displeased powerful federal officials.

Trump likely chose now to sack him after former director of national intelligence James Clapper told a congressional subcommittee no evidence of collusion between his campaign and Russia was found.

An earlier sacking would have made it easy for critics to claim he wanted an investigation into alleged Russian US election hacking quashed - even though no evidence suggests interference. If any existed, it would have come out long ago.

A new director will replace Comey. Dirty agency business will continue without missing a beat, subverting rule of law principles and democratic values like always. It's the American way!