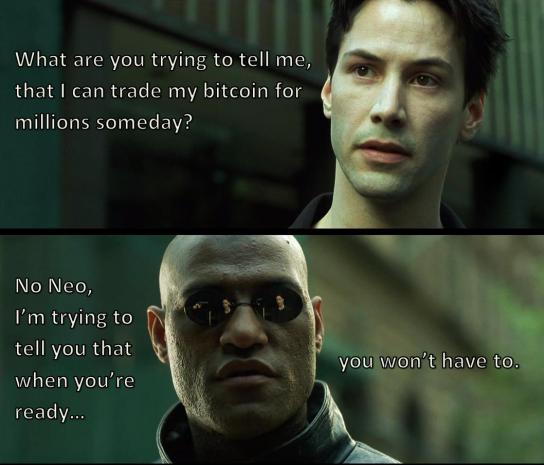 I met my friend, Morpheus (now in federal custody), in 2005 at a meeting of the Libertarian Party of Palm Beach County in Florida. At the time I was struck by how quickly he understood the ethics lessons that I was teaching then. We quickly became good friends and stayed in touch after he moved to Arizona about 6 months later.

In 2012, just 12 months to the day after my wife's death, I pulled up stakes and moved to the Phoenix area to become part of the freedom activist community in which Morpheus was a well known participant. Since then I've had many opportunities to admire his honesty, courage and fortitude in resisting the evils of mala prohibita (victimless "crimes") enforcement.

The price he has paid for his extraordinary freedom has been severe. He has been robbed of multiple vehicles, beaten, tased, cuffed, kidnapped, strait-jacketed, prosecuted, fined, and caged just for being free – NOT for harming anyone. In fact, he is currently in prison for buying and selling BitCoins – a commodity comprised of strings of numbers and letters. What could be more absurd?

He was arrested on April the 20th while making a BitCoin deal, and then his apartment was raided and he was charged with owning a handful of ammunition that was found in his apartment (no guns though). So now the feds are trying to build a case against him, probably for "money laundering", but they have as yet not charged him and have not specified a "probable cause" for his arrest. Meanwhile they won't let him bail because they consider him a "flight risk" - which in fact he is NOT. And he is languishing in prison until a hearing or trial scheduled for August.

So I am appealing to all you freedom-loving, anarchist, libertarian, or constitutionalist, "activists" to ante-up for Morpheus's defense – because if you don't step up and help him, there will likely be no one to come to your defense when the Nazi thugs come for YOU… and they will I can guarantee.

I've talked to attorney Marc Victor on Morpheus's behalf, and he will charge $800 just to go out to where Morpheus is being held and do an initial interview. His actual defense in court is likely to run tens of thousands of dollars.

This case is likely to be a precedent setter. The federal government cannot afford to let anyone buy, sell, or financially transact anything without their demanding a slice of the revenue (in taxes). So the outcome of this case could result in your total financial enslavement, OR it could set a precedent that will legitimize the first truly free market on the planet in over 8,000 years.

Make no mistake. Unless we defend Morpheus with every resource available to us, his fate will eventually become ours. If you don't want to rot in some gulag, donate for his defense while you still can.

If you'd like to write to him, here is his address in captivity:

Cryptocurrency as Money - Store of Value or Medium of Exchange?

Ballad of the crypto 6

Boots on the ground from "Bitcoin Beach" in El Salvador

Bitcoin - to hold or not to hold

Why a "Digital Dollar" Is a Really Bad Idea

THE WORLD OF TOMORROW: SEVEN TRENDS IN BITCOIN MINING AND ENERGY

Bitcoin Vs. Pirate Chain: The Ultimate Fight for Financial Freedom

Bitcoin Is Freedom From The Fiat System's Walled-Garden