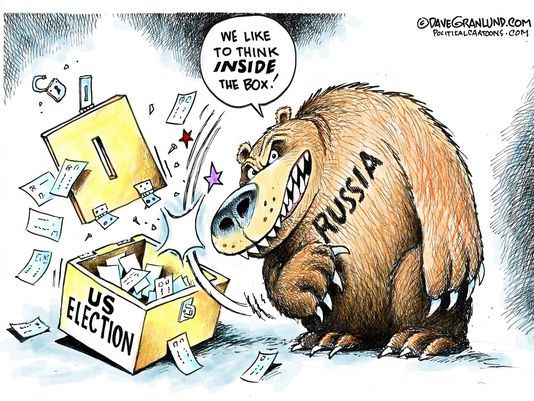 If evidence of Russian hacking or other type meddling in America's presidential election last November existed, it would have been revealed months ago.

Instead, US intelligence officials made baseless accusations and allegations - supported by nothing because no evidence suggests Moscow interference of any kind in US electoral politics.

Why would Russia or any other country want to meddle in a system turning out the same way every time - duopoly power always winning, each of its two right wings taking turns governing, maintaining continuity, prohibiting responsible change!

Yet a so-called top secret NSA report was leaked to The Intercept, claiming without justification that "Russian military intelligence executed a cyberattack on at least one US voting software supplier and sent spear-phishing emails to more than 100 local election officials just days before last November's presidential election," the web site reported.

It said the document obtained was anonymously provided, "independently authenticated," though lacking " 'raw' intelligence on which" NSA claims were made.

An unnamed "US intelligence officer" cautioned about drawing conclusions from its material. Here's a sample:

Where's the evidence. None was presented, making the above claims groundless - anti-Russian propaganda supported by nothing.

"I have not seen any direct proof," he stressed, adding he's "deeply convinced that no interference from the outside, in any country, even a small one, let alone in such a vast and great power as the United States, can influence the final outcome of the elections. It is not possible. Ever."

Each US state has its own electoral system. None reported evidence of foreign tampering or other interference. If otherwise, screaming headlines would have reported it.

Earlier US intelligence community claims about Russian US election hacking were baseless.

Once again, accusations and allegations were made with no evidence backing them, nothing presented because nothing exists.

The Intercept was used as a vehicle for spreading phony claims about Russian interference in America's presidential election.

Perhaps the "top secret" NSA report wasn't so secret after all.