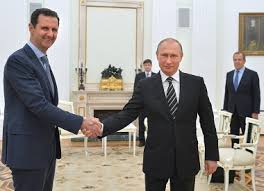 Rex Tillerson wants Russia to agree on establishing no-fly zones in Syria - meaning we fly, you don't, an unacceptable notion.

Russian aerial operations, intelligence, and ground support, including special forces deployed to the country, are crucial for any hope to eventually free Syria from the scourge of US-supported terrorism.

They've been involved in the liberation of Palmyra and elsewhere in the country. They're "equipped with state-of-the-art weapons, equipment and modern technology."

According to Syrian military sources, they're involved with government forces to liberate Deir Ezzur from ISIS control. Al-Hadath news said Moscow will deploy additional troops to Syria if Damascus requests them.

"The future of Syria and the political future of President Assad should only be determined by the Syrian people."

His comments came in response to Rex Tillerson, saying he has "no (future) role" in Syria, a notion Russia and international law reject.

Along with combating and eliminating the terrorist threat, "(a) constitution is something that, in the long run, should reflect all concerns of all ethnic, religious and political groups in Syria and that is to ensure balance of interests of each of these groups."

Implementing de-escalation zones is vital "to normalize relations within the framework of the ceasefire between government troops and armed opposition forces, (along with) creat(ing) conditions for them to stop fighting against each other and consolidate their efforts to rebuff terrorism."

On Monday, a seventh round of Geneva talks began. More Astana talks are planned.

So far, no breakthroughs were achieved because Washington wants war, not resolution.

The US Has Conducted 3 Consecutive Days Of Airstrikes In Syria

The Sound of Freedom