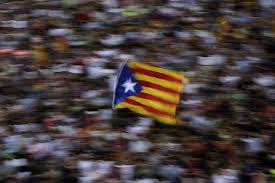 Self-determination is a universal right. Constitutional and statute laws against it violate the UN Charter and other international law.

On Saturday, Spanish PM Mariano Rajoy suspended Catalan self-governance extrajudicially, a coup by any standard, stripping the region of autonomy, annulling its executive and parliamentary powers, imposing fascist Madrid rule - with full EU and US support and encouragement.

"I ask the parliament to meet in a plenary session during which we, the representatives of the citizens' sovereignty, will be able to decide over this attempt to liquidate our government and our democracy, and act in consequence."

Regional parliament Speaker Carme Forcadell rejected Rajoy's action, saying he "wants the parliament of Catalonia to stop being a democratic parliament, and we will not allow this to happen."

One option is defying Madrid by declaring regional independence, announcing the formation of a new Catalan republic - what should have happened straightaway after overwhelming October 1 referendum day voting, calling for separation from Spain.

Puigdemont pledged it within 48 hours. It's now 22 days later. His call for dialogue with Madrid fell on deaf ears. Brussels spurned him.

Last evening, he addressed hundreds of thousands of Catalans massed in Barcelona, protesting Madrid's action, explaining his multiple calls for dialogue with Madrid got "the same answer - silence of repression."

He called imposition of direct rule over the region "the worst attack on the institutions and the people of Catalonia since the decrees of the military dictator Francisco Franco."

Spain under Rajoy is a political dictatorship at war with its own people, exploiting and repressing them nationwide.

He acted to eliminate Catalan institutions, said Puigdemont, stressing if European "values are at risk in Catalonia, they will also be at risk in Europe."

Rajoy's action contradicts "foundations that unite EU citizens through their diversity." Puigdemont failed to suggest whether he'll follow through on his pledge to declare independence.

Madrid intends usurping total control over the region, including its media - so the regime's message alone is heard. Media officials may be dismissed, pro-Rajoy ones replacing them.

Control will also be exerted over Catalan telecommunications, digital services, and information technology.

Puigdemont, Vice President Oriol Junqueras, 12 ministers, and other administration officials will be dismissed - replaced by Rajoy-appointed administrators. MPs were stripped of their powers, Madrid having veto power over their actions.

Rajoy called for a snap election within six months or "as soon as institutional normality is restored," he said.

Direct Madrid rule over Catalonia will be finalized after snap elections are held. Until then, Rajoy-appointed administrators will run things.

Catalan police will be controlled by "an authority created or designated" by Madrid. Non-compliers will be dismissed and replaced.

"That's why we don't really understand (its) tactics. It's almost like they don't understand us here at all."