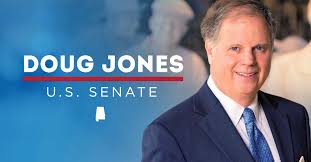 Democracy in America is farcical, illegitimate, more fantasy than real. Voting is an exercise in futility. Dirty business as usual always wins.

Most federal, state and local office holders in the country represent establishment interests, not the electorate, not ordinary voters.

Virtually the entire US Senate (a millionaire's club) and most House members were chosen by powerful interest groups.

Candidates representing ordinary people have no chance to become president or hold a leadership congressional position. The same holds for states and cities. Rare exceptions prove the rule.

America is a plutocracy, not a democracy, its debauched political system money-controlled, its agenda much the same on war and peace, corporate empowerment, and police state toughness against nonbelievers no matter which wing of duopoly governance holds power.

Former US Attorney for the Northern District of Alabama Jones will take office in January. He'll fill the seat vacated by Jeff Sessions, chosen by Trump as attorney general.

His victory narrows the GOP Senate majority to a razor-thin 51 - 49 margin, giving undemocratic Dems a better chance to win control of the body in November 2018 elections.

Moore is a former chief justice of the Alabama Supreme Court, removed from office in November 2003 by the Alabama Court of the Judiciary for refusing a federal court order to remove a Ten Commandments monument he installed in the lobby of the Alabama Judicial Building.

In 2006 and 2010, he lost GOP gubernatorial primary races, was again elected chief Justice of Alabama's Supreme Court in 2016 - suspended in May last year for ordering probate judges to enforce the state's ban on same-sex marriages, despite it having been ruled unconstitutional by the US Supreme Court.

In a 5 - 4 ruling, the High Court said the ban violates 14th Amendment protections.

Following an unsuccessful appeal of his suspension, Moore announced he'd run for the US Senate.

During his campaign, nine women accused him inappropriate sexual or social conduct. Three women, aged 14, 16 and 28, said he sexually assaulted them.

Moore denied the charges, admitting he approached or dated teenaged girls. Witnesses said he had a reputation for approaching them in public, asking them out on dates.

One woman said Moore sexually assaulted her when she was aged-14 and he was 32 years old. Moore denied knowing her.

Another woman accused him of sexually assaulting her when she was aged-16, claiming Moore said "(y)ou're just a child. I'm the district attorney. If you tell anyone about this no one will ever believe you."

Moore denied the accusation. Senate Majority Leader Mitch McConnell and House Speaker Paul Ryan urged him to drop out of the race. He refused.

Trump initially asked him to step aside, then endorsed him in late November.

Now defeated, it remains to be seen if a narrower GOP Senate majority matters in 2018 legislative battles.

Differences between both parties are political, not ideological, each one seeking to hold power over the other, governing much the same on major issues, consistently betraying the public interest.

Doomsday Clock Moves Closer Than Ever to Midnight

Putin in Israel: No Place for a World Leader or Anyone Else

Iran Close to a Nuclear Breakout