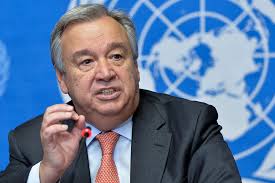 Antonio Guterres was appointed UN secretary-general by Washington to serve its interests.

Deviation could get him dismissed or eliminated by more sinister means.

During his first year in office, he fulfilled Washington's demands, violating his oath of office and UN Charter he swore to uphold.

He disgraces his high office like his predecessors, consorting with Ziofascists in Washington, other Western capitals and Israel on demand.

Last March, he disgracefully pulled a scathingly honest report by Richard Falk and Virginia Tilley on Israel as an apartheid state - a high crime against humanity under international law.

Last August, addressing the issue of Israel, apartheid and future, Falk minced no words, saying its "clear that on all the major issues, international law is strongly on the side of Palestinians, whether it is a matter of the illegal settlements, the blockade of Gaza, the annexation of Jerusalem, the diversion of water, the use of excessive force…the right of return of refugees," and many others.

Guterres sides with the criminal class infesting America, other Western states, their allies and Israel. If not, he wouldn't be UN secretary-general.

He and his predecessors failed to act responsibly to help Palestinians and other oppressed people, siding with their oppressors.

Last summer, he called Gaza "one of the most dramatic humanitarian crises" he's seen - yet did nothing to demand an end to Israel's illegal blockade, or demand its criminal class be held accountable.

He pretends longtime Israeli collaborator Abbas serves legitimately, a Judas betraying his people since pre-Oslo, well-rewarded for his treachery.

In deference to Washington and Israel, Guterres refuses to meet with Hamas leaders, Palestine's legitimate government, democratically elected - isolated for demanding its liberation.

"When I took office one year ago, I appealed for 2017 to be a year for peace.

Unfortunately - in fundamental ways, the world has gone in reverse.

Conflicts have deepened and new dangers have emerged.

Global anxieties about nuclear weapons are the highest since the Cold War.

Climate change is moving faster than we are.

Nationalism and xenophobia are on the rise.

I truly believe we can make our world more safe and secure.

We can settle conflicts, overcome hatred and defend shared values.

But we can only do that together.

I urge leaders everywhere to make this New Year's resolution: Narrow the gaps.  Bridge the divides. Rebuild trust by bringing people together around common goals.

Unity is the path.

Our future depends on it.

Throughout his first year as UN secretary-general, Guterres did nothing substantive to address the issues he raised.

He did just the opposite by siding with US-led dark forces responsible for today's deplorable state, its wars of aggression he didn't explain, its global state terror left unmentioned.

Instead of helping to alleviate and improve horrific global conditions, worsening, not improving, Guterres shares blame for what's going on.

United Nations was HACKED from April until August: