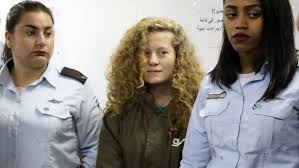 Aged-16 Ahed is remarkable by any standard. Arresting and indicting her for slapping Israeli soldiers in response to being slapped on her family's front lawn gained her international recognition - a teenager courageously confronting belligerently intrusive soldiers representing a ruthless apartheid state.

Guilt by accusation is standard practice for Palestinians. Exoneration rarely happens once charges are made.

According to Lasky, Ahed faces 12 charges, including assaulting an Israeli soldier, interfering with a soldier's duties, and earlier stone-throwing incidents.

Charges against Nariman include incitement for uploading the slapping incident video gone viral online, and other bogus charges relating to assault she never committed.

Nour (aged-21) was charged with assaulting a soldier and interfering with a soldier's duties.

Ahed is a poster child for a UK activist group, her image appearing on London billboards with the slogans: "Free Ahed Tamimi" and "Freedom for Palestinian Prisoners."

Demonstrations worldwide support her, including in Berlin, Brussels, other European cities and New York.

Arresting, detaining and charging Ahed gravely violates Article 37 of the Convention on the Rights of the Child, stating:

"No child shall be deprived of his or her liberty unlawfully or arbitrarily."

"The arrest, detention or imprisonment of a child shall be in conformity with the law and shall be used only as a measure of last resort and for the shortest appropriate period of time."

Charging Ahed for slapping in response to being slapped by intrusive soldiers on her family's property, along with other phony accusations, constitute a gross perversion of justice - no credible evidence needed for convictions when Israel wants them.

Taping the slapping incident and uploading it online are acts of free expression, not crimes. Article 19 of the International Covenant on Civil and Political Rights states:

"Everyone shall have the right to hold opinions without interference."

"Everyone shall have the right to freedom of expression; this right shall include freedom to seek, receive and impart information and ideas of all kinds, regardless of frontiers, either orally, in writing or in print, in the form of art, or through any other media of his choice."

Expressing views freely is the most fundamental free society right - banned in Israel, an Islamophobic police state, terrorizing Palestinians for 70 decades, not the other way around.

Ahed, her family members and thousands of other Palestinians are political prisoners - the Trump White House and Congress silent about vicious Israeli repression.

I, an American Jew, won't be silent, not as long as breath remains in my body!

In solidarity with Ahed and others Israel treats viciously, I proudly say I am a Palestinian. All activists for justice are proud Palestinians.