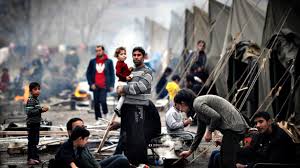 On Tuesday, US neocon UN envoy Nikki Haley said Trump "doesn't want to give any additional funding until the Palestinians agree to come back to the negotiation table…"

She lied claiming "(w)e're trying to move for a peace process, but if that doesn't happen, the president is not going to continue to fund" the UN Relief and Works Agency (UNRWA).

Washington provides over $300 million annually to the agency, pocket change for a nation wasting trillions of dollars on militarism and endless wars of aggression.

Last August, an unnamed UN mission to the UN official said "America has long been committed to funding UNRWA's important mission, and that will continue."

Former State Department official Ilan Goldenberg earlier said "(a)s with all issues involving the Palestinians, there is a combination of public railing against UNRWA with the public reality of continuing to fund it."

Established in 1949, it provides vital aid for millions of Palestinian refugees expelled from their homes in 1948, others in 1967, including their descendants and adopted children, dispossessed from their land, property, livelihoods, and fundamental rights.

Office of the UN High Commissioner for Human Rights (UNHCR) aids other refugees worldwide, including Palestinians displaced outside the above areas.

Since Trump took office, UNWRA's financial situation is more precarious than ever, given his rage to cut foreign aid and domestic social justice programs for greater militarism, warmaking, corporate handouts and tax cuts for the rich.

"By recognizing Occupied Jerusalem (al-Quds) as Israel's capital, Donald Trump has not only violated international law, but he has also singlehandedly destroyed the very foundations of peace and condoned Israel's illegal annexation of the city."

"We will not be blackmailed," she stressed, adding "Palestinian rights are not for sale."

Trump "sabotaged our search for peace, freedom and justice. Now he dares to blame the Palestinians for the consequences of his own irresponsible actions!"

Hopefully enough other PLO executive committee members are with Ashwari in standing up against US bullying.

In a series of disgraceful Tuesday tweets, showing contempt for Palestinian rights and common decency, Trump said Washington gives "the Palestinians HUNDRED OF MILLIONS OF DOLLARS a year" and yet gets "no appreciation or respect."

"But with the Palestinians no longer willing to talk peace, why should we make any of these massive future payments to them?" he asked.

Trump disgraces the office he holds. He's a warrior, not a peace president, deploring the notion - indifferent to human suffering, contemptuous of democratic values, rule of law principles, and governance of, by and everyone equitably.

He risks catastrophic nuclear war on one more countries. As long as neocons infest his administration, humanity is threatened by endless aggression.