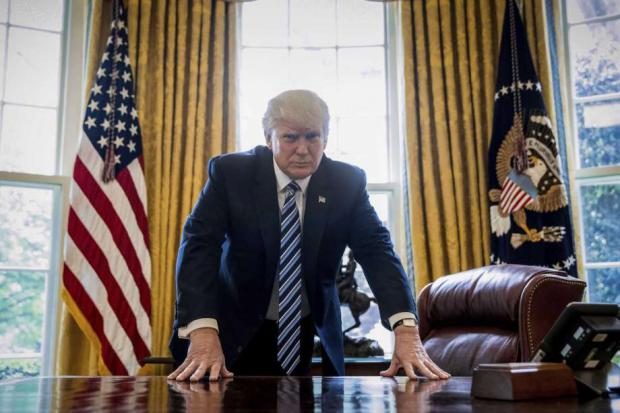 Last year on January 20, he was sworn into office as America's 45th president.

Every populist promise made was breached straightaway. Instead of draining the swamp, he filled it with neocons, Wall Street predators, hawkish generals, and billionaires.

He assured government of, by and for its privileged class exclusively, the way it's always been in America from inception, the nation a fantasy democracy, not the real thing - far worse than ever since the neoliberal 90s, notably post-9/11.

The myth of the anti-establishment candidate vanished straightaway after Trump's inauguration.

He's a dirty politician like most others in Washington - responsible for enormous harm to countless millions at home and abroad.

He didn't become a billionaire by being a good guy. Now he's president and commander-in-chief of the nation's military with his finger on the nuclear trigger he may be itching to squeeze.

He curries favor with rogue states like Israel and Saudi Arabia, vilifies sovereign independent ones, marks them for regime change, waging endless wars of aggression and phony war on terrorism like his predecessors.

He pledged improved relations with Moscow. They're more dismal than ever. His defense secretary called Russia and China America's main adversaries. Is military confrontation planned against them?

Most workers in Trump's America struggle to get by on rotten part-time or temp jobs paying poverty wages.

They're one missed paycheck from homelessness, hunger and deprivation, an uncaring nation doing nothing to help, pretending prosperity exists at a time of protracted Main Street Depression.

Trump's promise of the great GOP tax cut heist lifting all boats was a bald-faced lie. He, corporate predators, and the nation's super-rich will benefit hugely. Most ordinary Americans will pay higher taxes when the law sunsets.

Trump: "We, the citizens of America, are now joined in a great national effort to rebuild our country and to restore its promise for all of our people."

Fact: Only privileged ones and corporate predators benefit from Trump's policies.

Trump: "(W)e are transferring power from Washington, DC and giving it back to you, the American people."

Fact: The "people" he meant are the nation's rich and powerful, no others.

Trump: "For too long, a small group in our nation's capital has reaped the rewards of government while the people have borne the cost."

"Washington flourished, but the people did not share in its wealth. Politicians prospered, but the jobs left, and the factories closed."

"The establishment protected itself, but not the citizens of our country. Their victories have not been your victories…"

"That all changes, starting right here, and right now, because this moment is your moment. It belongs to you."

They're far worse than ever now - a nation beautiful only for its privileged few, most others exploited so they can benefit hugely.

That's the deplorable state of the nation under Trump, his rogue's gallery of administration officials, extremist bipartisan congressional members, and federal courts, stacked with right-wing extremists.

The words "Equal Justice Under Law," adorning the Supreme Court Building's cornerstone, belie its decisions, arguments, and "supreme" allegiance to wealth, power, privilege, not "We the people."

Privilege always counted most in America since its founding. The prevailing fiction about an egalitarian nation is belied by the extreme disparity between super-wealth and ordinary people struggling to get by.

America was always ruled by men, not laws, who lie, connive, misinterpret and pretty much do what they want for their own self-interest and powerful allies.

"The people" who matter most are the nation's rich, well-born and able, the ones John Adams said should run the country.

Trump: "January 20th, 2017 will be remembered as the day the people became the rulers of this nation again. The forgotten men and women of our country will be forgotten no longer."

Fact: They're more exploited, otherwise abused, and "forgotten" than ever.

Each changing of the guard in Washington assures dirty business as usual continuing. Names and faces change. Policies inflicting enormous harm on countess millions stay the same or worsen.

Things today are more dismal and disturbing than any time in modern memory. The nation is permanently at war, including against its own ordinary people, its poor and most vulnerable harmed most.

Instead of fulfilling his inaugural promises, Trump proved he's just another dirty politician.

He may be the first US president to use nuclear weapons since Harry Truman at a time some nations his administration marks for regime change can retaliate with their own - risking armageddon.