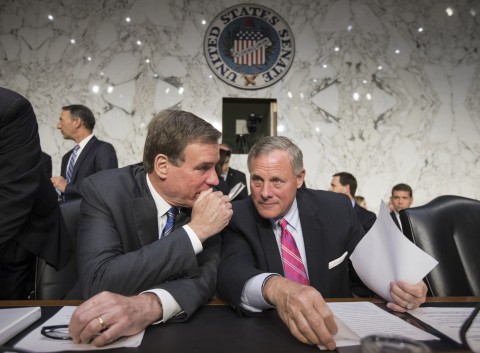 New Illegal US Sanctions on Russia

Unilaterally imposed sanctions by one country on others have no legal standing.

The world community should declare them null and void. US pressure, bullying, bribes and threats get other nations to bend to its will - an unacceptable situation. Yet it persists.

Unilateral US sanctions on other countries target their economies, harming their people, futilely hoping they'll blame their government for hard times and and want it replaced, one of the ways Washington pursues regime change - by economic and financial war, propaganda war at the same time.

New US sanctions were imposed on 21 Russian and Ukrainian nationals, along with nine Russian companies - Power Machines among them, a global leader in its industry.

Other power and energy companies were targeted. In response, Russia's Foreign Ministry issued a statement saying:

"Washington still cannot get rid of an illusion that we can be intimidated by US visa denials or trade restrictions, that we can be coerced into abandoning an independent stance on the international arena, defending our national interests," adding:

"The time has come for strategists in Washington to realize that by continuing their senseless sanctions campaign, which has not given and will not give any results, and will only result in financial losses for US business, they demonstrate to the whole world their own impotence."

"If the US authorities opt to break economic and other ties with Russia, it is their right, as we reserve our right to respond."

On June 30, 2017, Russian President Vladimir Putin signed a decree "On the renewal of certain special economic measures to ensure the security of the Russian Federation."

Earlier, Moscow responded appropriately to imposition of sanctions by Washington, Brussels and other countries. They remain in place, renewed through December 31, 2018.

Since September 2016, the list of sanctioned products was updated six times, new banned items added, some removed, permitting their importation.

Sanctions are counterproductive and ineffective. They're imposed for punitive reasons, yet accomplish nothing other than harming ordinary people in targeted nations.

US sanctions on Russia's economy failed. It grew in 2017, further growth expected this year.

Many years of sanctions on Iran and North Korea did nothing to change their policies, just the opposite. Both countries are determined to defend themselves against feared US aggression.

Despite US economic and political war on Venezuela, ruling United Venezuelan Socialist Party (PSUV) candidates won 308 of 335 municipal elections in December, a 92% triumph, including 21 of 23 state capitals and the Caracas Capital District.

President Nicolas Maduro triumphantly said "we have won 19 governorates, including Zulia, which is the most populous state in the country."

"We're ready to compete" in next year's presidential election. Control over most municipalities boosts Maduro's chance for reelection.

Days earlier, he announced his candidacy, elections to be held by end of April. If mid-December PSUV trouncing of opposition candidates is indicative, he's likely to win another term.

Punishing US sanctions won't prevent it. Nor have they turned Iranians against their government.

Last November at the Valdai Discussion Club, Vladimir Putin explained illegal, unilaterally imposed US sanctions on Russia aim to oust the country "from European energy markets…compelling Europe to buy more expensive US-produced LNG although the scale of its production is still too small."

While it's natural for countries to have their own interests, "(t)he question is the means" they choose to pursue them, Putin stressed.

Russia rejects efforts by America and other nations to achieve their aims at the expense of others, stoking tensions, creating instability, leading to conflicts.

It's an exercise in futility. Russia is strong, resilient and resourceful. Washington's hostile agenda hasn't worked.