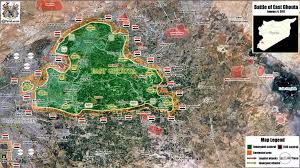 So far, they refused to agree on relocating their forces to Idlib province. Over 13,000 other East Ghouta terrorists and their family members surrendered their heavy weapons, leaving the enclave, transported by buses to Idlib.

According to Russia's UN envoy Vasily Nebenzya, about 121,000 East Ghouta civilians have been liberated, given vitally needed humanitarian aid denied them in captivity.

In the past 24 hours, hundreds more left. Eliminating terrorists from East Ghouta will greatly improve Damascus area security - why successfully completing the operation is crucial.

"State-sponsors of terrorism have instructed the terrorists to use chemical weapons again," Jaafari explained, adding:

"This theatrical gesture will be carried out with the participation of a number of countries (notably attacking women and children), the White Helmets, and will be covered in Western media" - Syria again falsely blamed.

"The victims will be transferred to Israeli hospitals. This all will take place on the Syria-Turkey border."

Russia issued a similar warning in January, warning Washington of serious consequences if any of its personnel are harmed.

It's struggle to be free from US-supported terrorists has a long way to go, maybe years more conflict ahead - Syrian civilians harmed most by US rage for achieving another imperial trophy, the human toll of no consequence.

World Community Failure to Uphold the Rule of Law