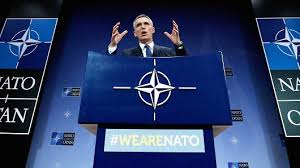 Russophobic shoes keep dropping, another explained below, likely worst of all to come, a hugely dangerous situation, risking nuclear war.

Washington controls NATO, including who fills top positions and serves as its director-general.

On Tuesday, he withdrew accreditation of seven Russian Mission to NATO diplomats - along with denying the pending accreditation request for three others.

Bowing to Washington's will, he cut Moscow's alliance staff from 30 to 20 individuals, another slap in the face on top others preceding it.

Stoltenberg: "This sends a clear message to Russia that there are costs and consequences for its unacceptable and dangerous pattern of behavior."

"And it follows Russia's lack of constructive response to what happened in Salisbury.

"Our actions reflect the serious security concerns expressed by all allies, and are part of the coordinated international effort to respond to Russia's behavior."

The above remarks represent the latest Russophobic shoe to drop, much more likely coming.

Stoltenberg turned truth on its head - conspiratorially allied with Washington, Britain and other alliance members hostile to Russia.

Claiming NATO's action is proportionate in line with its legal obligations is utter rubbish.

Adding "(t)oday's decision does not change NATO's policy towards Russia" is true.

US/UK-led Western and allied nations are guilty of recklessly dangerous behavior, not Russia.

Make no mistake, US-dominated NATO is waging war on Moscow without declaring it - so far politically and economically alone, heading for military confrontation if the madness continues on its present destructive course.

"(I)f we continue the analogy, sometimes I think that maybe it would be best if our bear just sat still. Maybe he should stop chasing pigs and boars around the taiga but start picking berries and eating honey. Maybe then he will be left alone."

"But no, he won't be! Because someone will always try to chain him up. As soon as he's chained they will tear out his teeth and claws. In this analogy, I am referring to the power of nuclear deterrence."

"As soon as - God forbid - it happens and they no longer need the bear, the taiga will be taken over."

"And then, when all the teeth and claws are torn out, the bear will be of no use at all. Perhaps they'll stuff it and that's all."

"So, it is not about Crimea but about us protecting our independence, our sovereignty and our right to exist. That is what we should all realize."

Strong words! Putin understands what he and Russia are up against. Will the Russian bear be chained, its teeth and claws torn out, or will it defend its sovereign independence against US-led Western forces wanting it neutralized and controlled?

One side will likely prevail over the other - unless nuclear war destroys everyone.

Putin sounded like he's ready to go to the mat as required to defend what's vital to preserve if belligerently challenged.

Reelected for a fourth term on March 18, he'll lead Russia until 2024.

Given Washington's rage for transforming Russia and all other sovereign independent countries into US vassal states, he'll likely be tested more than earlier.

Whether their existence can save humanity the way mutually assured destruction (MAD) worked during the Soviet period Cold War era is very much uncertain - a frightening situation.