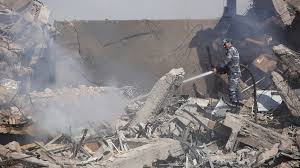 A state of war existed between both countries since Israel's establishment - an uneasy armistice since the 1973 Yom Kippur war, interrupted briefly during 1982 IDF aggression in Lebanon.

Syria doesn't recognize the apartheid Jewish state on stolen Palestinian land. No diplomatic relations between both countries exist, no economic ties other than occupied Golan Druze apple sales to the Syrian Arab Republic.

Israel partners with US naked aggression in Syria. Both countries support ISIS and other terrorist groups.

Israeli cross-border attacks increased since US aggression began in March 2011.

"One thing should be clear. If someone fires on our planes, we will destroy them. What's important to us is that the weapons defense systems that the Russians transfer to Syria are not used against us. If they are used against us, we will act against them."

All nations may legally defend their territory if attacked. They're obligated to protect their citizens. Syria wants S-300s for defense, not offense.

When nations are attacked by a hostile power, international law affirms their right of self-defense.

Aggressors have no rights. They're guilty of the highest of high crimes. US-dominated NATO and Israel threaten world peace and stability.

Vulnerable nations need all means of self-defense possible. Threats they face are too great to ignore.

Lieberman lied saying Israel "doesn't interfere in Syria's internal affairs, but on the other hand we won't allow Iran to flood (the country) with advanced weapons systems that would be aimed against Israel," adding:

"If anyone attacks us, we will retaliate, regardless of S-300, S-700 or any anything else's presence there."

S-400s are Russia's most sophisticated air defense systems, S-500s under development expected for use in 2020.

No nations threaten Israel - not Russia, Syria, Iran or any others. No Iranian weapons in Syria are "aimed" at Israel.

Damascus has every right to protect itself against aggression by Israel, Washington, and other countries threatening its sovereignty.