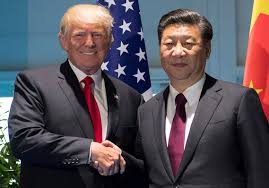 Aiming to avoid a trade war, Trump is sending a quartet of trade hawks to Beijing on May 3 and 4 to meet with President Xi Jinping and other Chinese officials.

They'll meet with their Chinese counterparts. On Tuesday, Trump announced the trip, saying he hopes things will work out.

Last August, he initiated an investigation into China's intellectual property practices under Section 301 of the Trade Act, saying:

"The investigation will seek to determine whether acts, policies, and practices of the Government of China related to technology transfer, intellectual property, and innovation are unreasonable or discriminatory and burden or restrict US commerce."

He may begin a new investigation, focusing on China's cloud computing sector. The US Treasury is working on measures to restrict Chinese investments in sensitive US economic sectors, along with possibly restricting related exports to the nation.

Congressional legislation may expand US Committee on Foreign Investment authority to increase scrutiny of investments in America by certain countries, notably China.

They're experiencing delays in license approvals, mergers and acquisitions, along with longer waits to clear customs.

Resolving trade issues between both countries won't be simple or short-term. Things could drag on for an extended time - very possibly leaving key disputes unresolved.

They include national policies on public health and environmental laws, food-labelling practices, even religious standards regarded as impediments to trade.

It calls Mexico's hydrocarbon law a trade barrier because it requires foreign companies to use domestic courts to settle disputes - rather than unaccountable (corporate-run) international tribunals.

EU privacy legislation is considered a trade barrier. So are health policies designed to improve maternal and infant care.

US steel and aluminum tariffs on Chinese imports took effect. So have Beijing tariffs on US pork, apples and wine. Both countries announced $50 billion worth of tariffs on each other's imports.

After Trump threatened another $100 billion, Beijing vowed to follow suit in response to further tariffs on its products.

US/Chinese talks next week could be contentious. They aren't likely to resolve deep-seated trade disputes.

Beijing wants good economic and political relations with Washington. But it's not about to yield to unreasonable demands.

Both countries hope a trade war can be avoided. It may be hard to avoid one.

In mid-April, Trump shamefully flip-flopped on the Trans-Pacific Partnership (TPP) he condemned during the 2016 presidential campaign.

He ordered administration economic officials to "negotiate entry" into the agreement he pulled out of after taking office, calling it "horrible…a rape of our country…wealthy people…tak(ing) advantage of us."

His policy change "signal(s) that (he) does not give a crap about working people and cannot be trusted on anything."

I made similar comments in numerous earlier articles on his deplorable domestic and geopolitical policies.

Families of US Embassy personnel in Ukraine ordered to begin evacuating...